Bicerin is a traditional hot drink native to Turin, Italy, made of espresso, drinking chocolate, and milk served layered in a small glass. 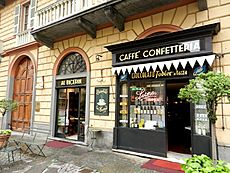 The word bicerin is Piedmontese for "small glass" and is the equivalent of Italian bicchierino (diminutive of bicchiere, or “glass").

This coffee beverage has existed since the 18th century and was praised by Alexandre Dumas in 1852. It is believed to be based on the 17th century drink bavarèisa ("Bavarian"): the key distinction is that in a bicerin the three components are carefully layered in the glass rather than being mixed together.

Caffè al Bicerin, sits across from the Santuario della Consolata, a historic coffeehouse in Turin's piazza della Consolata, has been serving the drink since the 18th century. Local lore suggests that Bicerin was invented at Caffė al Bicerin or at Caffė Fiorio around 1704.

The Vicenzi Family Distillery in Turin also produces a chocolate hazelnut liqueur under this name.

All content from Kiddle encyclopedia articles (including the article images and facts) can be freely used under Attribution-ShareAlike license, unless stated otherwise. Cite this article:
Bicerin Facts for Kids. Kiddle Encyclopedia.