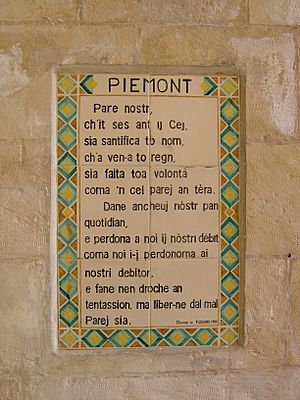 The Lord's prayer in Piedmontese language. 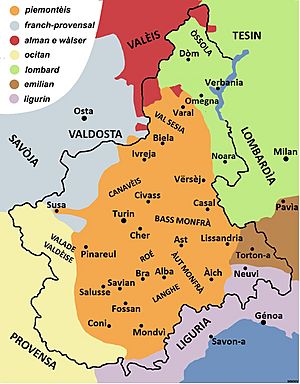 Languages of Piedmont, Piedmontese is shown in orange.

The Piedmontese language is a Gallo-Romance language spoken in Piedmont. The Council of Europe officially recognised it as a minority language in the 1980s. It is classified as an endangered language. In 2019, there were between 700,000 and 2 million speakers. Piedmontese has been in use since the 12th century. There are poems and literature, starting from the 16th century. In the 15th or 16th century, local authorities switched to the Italian language, which is based on the dialects of Tuscany. When the Italian state was founded in 1861, Italian was chosen as a national language. With urbanization, and mass media, Piedmontese was a loser again, Italian was more popular, and could reach more people.

All content from Kiddle encyclopedia articles (including the article images and facts) can be freely used under Attribution-ShareAlike license, unless stated otherwise. Cite this article:
Piedmontese language Facts for Kids. Kiddle Encyclopedia.