Palazzo Carignano is a historical building in the centre of Turin, Italy, which houses the Museum of the Risorgimento. It was a private residence of the Princes of Carignano, after whom it is named. Its rounded façade is different from other façades of the same structure. It is located on the Via Accademia delle Scienze. 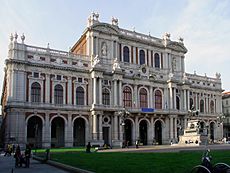 The 19th century rear façade of the Palazzo Carignano on Piazza Carlo Alberto.

The construction of the Palazzo Carignano was ordered by Prince Emmanuel Philibert, son of Thomas Francis, Prince of Carignano and his French wife Marie de Bourbon. The Prince commissioned architect Guarino Guarini to design a suitable residence for his home and the cadet house of the reigning House of Savoy.

Guarini designed the structure in the shape of a square, with a straight and restrained east façade and an elliptical façade on the west. Guarini also added a forecourt at the center of the palace. Construction began in 1679, when the Prince was 51 years old.

The decorations over the windows of the piano nobile recall the campaign of the Carignano family with Carignan-Salières Regiment against the Iroquois in 1667. The interior has always been described as lavish and has splendid frescoes and stucco decorations.

Among the frescoes are some by Stefano Legnani, called il Legnanino. The main stairwell is decorated with busts by Pietro Somazzi.

The building, constructed in brick in a typical Baroque style, has an elliptical main façade. This façade represents the only example of civic architecture making use of the undulating 'concave – convex – concave' rhythm established by Francesco Borromini in the church of S. Carlo alle Quattro Fontane in Rome.

The Palazzo was the birthplace of Marie Thérèse, Princesse de Lamballe in 1749 – confidant of Marie Antoinette and for whom she died in 1792. Charles Emmanuel, Prince of Carignano was born there in 1770. It was also the birthplace of the first King of Italy, Victor Emmanuel II in 1820.

All content from Kiddle encyclopedia articles (including the article images and facts) can be freely used under Attribution-ShareAlike license, unless stated otherwise. Cite this article:
Palazzo Carignano Facts for Kids. Kiddle Encyclopedia.