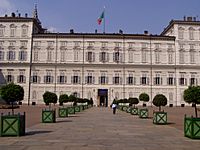 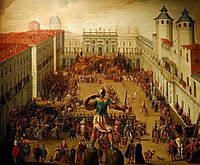 Painting of the arrival of Christine of France to Turin in 1619 showing the Palace at the time.

The Royal Palace of Turin (Italian: Palazzo Reale di Torino) is a building in Turin, Italy. It was the centre of the court of the old Duchy of Savoy for almost two hundred years.

The palace was the centre of the Savoyard royal court. It was the home of the royal family. It was greatly remodelled by Christine of France during the seventeenth century. The building was worked on by the famous architect Filippo Juvarra. The complex also includes the Palazzo Chiablese the home of the former Duke of Chablais. The Palace was also redecorated by Marie Jeanne of Savoy.

Before the marriage of Maria Antonia of Spain to Victor Amadeus III of Sardinia in 1750, the royal apartments were redecorated again.

Before becoming a royal residence, it was the centre of the Viceroys of Savoy that were appointed by Francis I of France after the French captured Savoy in 1536. The building later included the Bishops Palace called the Palazzo San Giovanni.

All content from Kiddle encyclopedia articles (including the article images and facts) can be freely used under Attribution-ShareAlike license, unless stated otherwise. Cite this article:
Royal Palace of Turin Facts for Kids. Kiddle Encyclopedia.