Anne Marie d'Orléans (27 August 1669 - 26 August 1728) was a niece of Louis XIV and was the wife of Victor Amadeus II of Sardinia. She was the mother-in-law of Philip V of Spain and the Dauphin of France. She was known as Anna Maria in her husbands kingdom.

She was born at the Château de Saint-Cloud. Her mother died when she was ten months old. A year later, her father remarried Elizabeth Charlotte of the Palatinate. Her half-brother Philippe d'Orléans, the future Regent of France. Her stepmother described her as one of the most amiable and virtuous of women.

Anne Marie d'Orléans' proxy marriage to Víctor Amadeus II took place at Versailles on 10 April 1684. Louis XIV gave her a dowry of 900,000 livres. She met her husband at Chambéry the following 6 May which were followed by another wedding ceremony. She was the mother of eight children. Anne Marie loved her husband greatly but he soon turned his attentions to his mistresses, one being the famous Jeanne Baptiste d'Albert de Luynes. Anne Marie's eldest child, Marie Adélaïde of Savoy, was sent to Versailles as a young girl in order to learn her future role as queen of France, but she died in 1712. Her husband had two further children with Jeanne Baptiste d'Albert de Luynes, his mistress from 1689 till 1700. Nonetheless, when he fell ill with smallpox, she nursed him until his recovery.

In November 1701, her third daughter, Maria Luisa, then barely thirteen years old, married Philip V of Spain. In 1706, during the siege of Turin by French forces under the command of her half-brother Philippe d'Orléans, and Spanish forces from her cousin Philip V of Spain, she and her sons, Victor Amadeus and Carlo Emanuele, were forced to flee the city.

As a result of his aid in the War of the Spanish Succession Victor Amadeus II was made King of Sicily in 1713 under the Treaty of Utrecht which ended the war. However Victor Amadeus II was forced to exchange Sicily for the less important kingdom of Sardinia in 1720. As queen, Anne Marie used the Royal Palace of Turin as well as the Villa della Regina which was her own property. Queen Anne Marie died of heart failure at her villa on 26 August 1728, the day before her 59th birthday. She is today buried at the Basilica of Superga in Turin being moved there in 1786 by her son Victor Amadeus III. Her husband, Víctor Amadeus II, abdicated in favour of his son in 1730, and died two years later having married a commoner.

From 1714 to 1720, Anne Marie d'Orléans was the heiress presumptive to the Jacobite claim to the thrones of England, Scotland, and Ireland. These claims were held at the time by James Francis Edward Stuart (son of James II) upon the death of his half-sister, Queen Anne. Anne Marie was displaced as his heir by the birth of the Old Pretender's son, Charles Edward Stuart ("Bonnie Prince Charlie") in December 1720. Through Anne Marie descend the current post-Stuart legitimist claims of the Jacobites to the English and Scottish thrones. 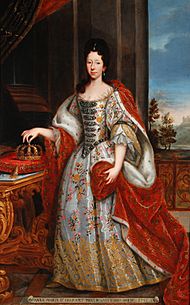 Anne Marie as Queen of Sardinia

All content from Kiddle encyclopedia articles (including the article images and facts) can be freely used under Attribution-ShareAlike license, unless stated otherwise. Cite this article:
Anne Marie d'Orléans Facts for Kids. Kiddle Encyclopedia.