Louis, Dauphin of France, Duke of Burgundy facts for kids 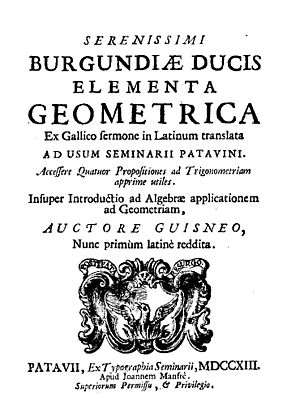 Louis de France was born in the Palace of Versailles, the eldest son of Louis, le Grand Dauphin, and his wife Maria Anna Victoria of Bavaria. At birth, he received the title of Duke of Burgundy.

Louis grew up with his younger brothers; Philippe, Duke of Anjou and Charles, Duke of Berry.

At the age of 15, he married his second cousin, Marie Adélaïde of Savoy, the daughter of Victor Amadeus II, Duke of Savoy and Anne Marie d'Orléans. This match had been decided as part of the Treaty of Turin, which ended Franco-Savoyard conflicts during the Nine Years' War. The marriage took place on 7 December 1697 at the Palace of Versailles. The two were in love with one another, a rarity at the court of Versailles.

Louis became Dauphin of France upon the death of his father in 1711.

In February 1712, his wife contracted measles and died on the 12th of that month.

The Duke of Burgundy, who dearly loved his wife and who had stayed by her side throughout the fatal illness, contracted the disease and died on 18 February, six days after her at the Château de Marly. Both of his sons also became infected, the eldest, Louis, Duke of Brittany, the latest in a series of Dauphins, succumbed to it on 8 March. The only one to survive was the two-year old Duke of Anjou, the future King Louis XV of France.

All content from Kiddle encyclopedia articles (including the article images and facts) can be freely used under Attribution-ShareAlike license, unless stated otherwise. Cite this article:
Louis, Dauphin of France, Duke of Burgundy Facts for Kids. Kiddle Encyclopedia.