Maria Anna Victoria of Bavaria (28 November 1660 – 20 April 1690) was the wife of Louis, the Grand Dauphin. She had three sons including the father of Louis XV of France and a King of Spain. In France she was known as Dauphine Marie Anne Victoire. She was a sister of the Violante Beatrice of Bavaria, the last Medici Grand Princess of Tuscany. At court she was known simply as Madame la Dauphine.

She was a daughter of Ferdinand Maria, Elector of Bavaria and Henrietta Adelaide of Savoy.

Through her first two sons she is an ancestor of the present King of Spain as well as the present Grand Duke of Luxembourg. 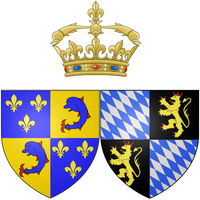 Arms of Marie Anne Victoire of Bavaria as Dauphine of France.

All content from Kiddle encyclopedia articles (including the article images and facts) can be freely used under Attribution-ShareAlike license, unless stated otherwise. Cite this article:
Maria Anna Victoria of Bavaria Facts for Kids. Kiddle Encyclopedia.