Juventus Stadium, known for sponsorship reasons as the Allianz Stadium since July 2017, sometimes simply known in Italy as [the] Stadium, is an all-seater football stadium in the Vallette borough of Turin, Italy, and the home of Serie A club Juventus Football Club. The stadium was built on the site of Juventus' and Torino's former home, the Stadio delle Alpi, and is one of only three club-owned football stadiums in Serie A, alongside Sassuolo's Mapei Stadium and Udinese's Stadio Friuli. It was opened at the start of the 2011–12 season and has a capacity of just over 41,000 spectators.

Juventus played the first match in the stadium on 8 September 2011 against the world's oldest professional football club Notts County, on 8 September 2011 in a friendly which ended 1–1; Luca Toni scored the first goal. The first competitive match was against Parma three days later, where Stephan Lichtsteiner scored the stadium's first competitive goal in the 16th minute. Juventus only lost three matches of their first 100 Italian top-flight league matches at the Juventus Stadium. 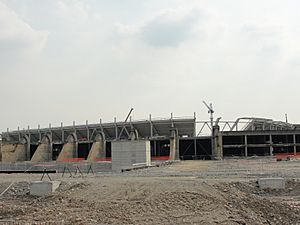 Another angle of the stadium being built

Juventus moved out of the unpopular stadium in 2006 and began plans to build a more intimate and atmospheric venue. In November 2008, the club unveiled plans for a new 41,000-seater stadium on the site of the Stadio delle Alpi. The new stadium, built at a cost of €155 million, features modern executive boxes, among other new developments. The completion of Juventus Stadium made Juventus the only Serie A club to build and own their stadium at the time. Then-club chairman Giovanni Cobolli Gigli described the stadium as "a source of great pride".

The construction project aimed to ensure a low environmental impact of the work of the construction site via the use of advanced environmentally sustainable technologies. This stadium is constructed to reduce energy consumption from non-renewable energy sources by reducing waste and optimising the resources available. The stadium can produce the electricity it needs using solar energy captured through photovoltaic panels; it produces warm water which heats rooms, changing rooms, kitchens and the football field through a network of district heating, heats hot water for the dressing rooms and kitchens of restaurants using solar thermal systems. These alternative energy sources are aimed at helping the stadium meet the criteria dictated by the Kyoto protocol by generating multiple results: 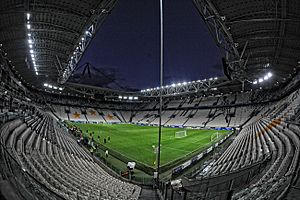 All the concrete from the old Stadio delle Alpi demolition have been separated and reused for the new building; other materials left have been divided into types, to be recycled, resold or reused throughout the new stadium's construction. The reinforced concrete used for the steps has been crushed down and reused as a supporting layer of the soil, with almost 40,000 m3 (52,000 cu yd) of concrete put towards the construction of the new stadium's foundations. Around 6,000 tons of steel, aluminium and copper were recovered, the re-use of which provided savings of more than one million euros. The implementation of this sustainable construction policy has ensured a global savings of approximately €2.3 million.

All content from Kiddle encyclopedia articles (including the article images and facts) can be freely used under Attribution-ShareAlike license, unless stated otherwise. Cite this article:
Juventus Stadium Facts for Kids. Kiddle Encyclopedia.