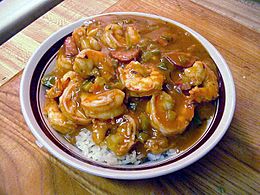 The cuisine of New Orleans encompasses common dishes and foods in New Orleans, Louisiana. It is perhaps the most distinctively recognized regional cuisine in the United States. Some of the dishes originated in New Orleans, while others are common and popular in the city and surrounding areas, such as the Mississippi River Delta and southern Louisiana. The cuisine of New Orleans is heavily influenced by Creole cuisine, Cajun cuisine, and soul food. Seafood also plays a prominent part in the cuisine. Dishes invented in New Orleans include po' boy and muffuletta sandwiches, oysters Rockefeller and oysters Bienville, pompano en papillote, and bananas Foster, among others.

Creoles are descendants of the settlers in colonial Louisiana, especially New Orleans. Before Louisiana became a part of the United States in 1803, it was colonized for more than a century, first by France and then by Spain. The Creoles were the American-born offspring of these European settlers. Some Creoles are people of mixed race who also have West African and Native American ancestry. The Creoles, most of whom originally spoke a dialect of French, created a sophisticated and cosmopolitan society in colonial New Orleans.

Creole cuisine is a fusion, unique to the New Orleans area, of French, Spanish, West African, and Native American cuisine. It was also influenced by later immigrants from Germany, Italy, and other locations. Like French food, it sometimes makes use of rich sauces and complex preparation techniques. Creole dishes often include onions, bell peppers, celery, tomatoes, and okra.

The Cajuns are descendants of the Acadians, French-Canadian colonists who were expelled from the Maritimes by the British. Some of the Acadians settled in rural areas of southern Louisiana in the 1760s and 1770s. The Cajuns spoke their own dialect of French. Some intermarried with other peoples, and so modern Cajuns have some non-Acadian ancestry.

Cajun cuisine is also based partly on French cuisine and also makes use of local ingredients such as onions, bell peppers, and celery. It tends to be hearty, rustic fare, complex in flavor but easier to prepare. Compared to Creole cuisine it uses less fish and more shellfish, pork, and game. Cajun food, while not always spicy, is known for its unique use of many seasonings, including garlic, hot peppers, and filé powder.

Soul food was created by the African-American descendants of slaves. It is closely related to the cuisine of the Southern United States, but its origins trace back to West Africa. It often features hearty, flavorful dishes made with economical ingredients. Soul food is very popular in New Orleans.

Seafood plays an important part in the cuisine of New Orleans. The city is located where the Mississippi River flows into the Gulf of Mexico, so its residents have access to a rich variety of both saltwater and freshwater fish and shellfish.

Entrees and side dishes 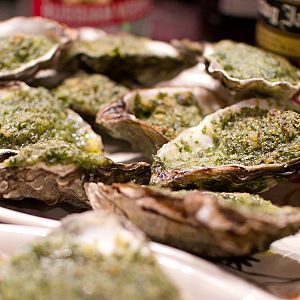 Oysters Rockefeller was invented at the New Orleans restaurant Antoine's. 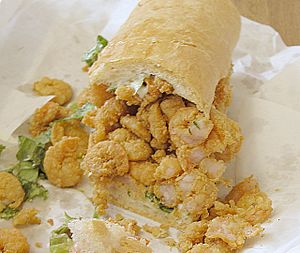 Po' boy sandwiches are associated with the cuisine of New Orleans 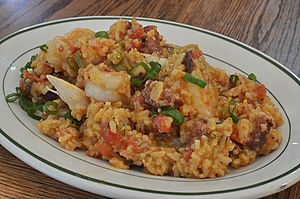 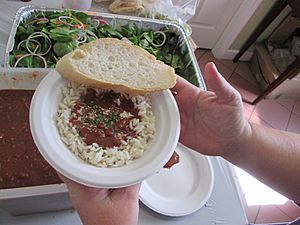 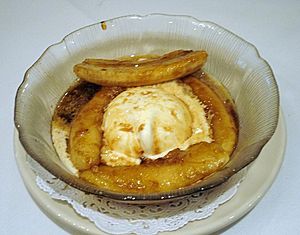 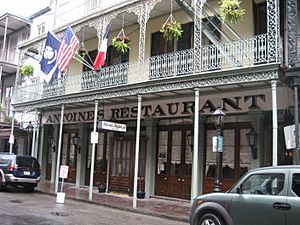 Antoine's restaurant is located in the French Quarter of New Orleans.

New Orleans has a very popular and varied restaurant scene.

The Picayune Creole Cook Book has been described as "an authentic and complete account of the Creole kitchen". It was published in 1900 during a time when former slaves and their descendants were moving North. Local newspapers warned that when the last of the "race of Creole cooks" left New Orleans "the secrets of the Louisiana Kitchen" would be lost.

The recipes published in the cook book were compiled by an unknown staffer at the Daily Picayune, who said the recipes came directly from "the old Creole 'mammies'". Since its publication it has been released in sixteen subsequent editions with very little alteration to the original recipes.

All content from Kiddle encyclopedia articles (including the article images and facts) can be freely used under Attribution-ShareAlike license, unless stated otherwise. Cite this article:
Cuisine of New Orleans Facts for Kids. Kiddle Encyclopedia.