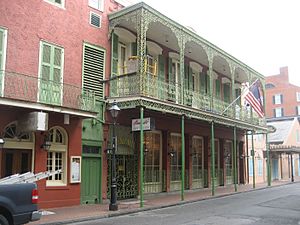 Arnaud's was founded in 1918, by a French wine salesman, Arnaud Cazenave. In 1978, sixty years after the restaurant opened, it was bought by Archie and Jane Casbarian. The Casbarian family worked towards getting the restaurant back to its original roots, the way founder Arnaud Cazenave intended. In effort to revert to the way the restaurant started, the building was renovated and the menu was altered. These changes brought the restaurant positive recognition and widespread approval.

Arnaud's is currently run by the 4th generation of the Casbarian family, Katy and Archie Casbarian and their mother Jane. The family is committed to preserving the original roots of the restaurant that were put in place by founder, Arnaud Cazenave. Arnaud's signature dishes are also served at a more family-friendly cafe, Remoulade, located on Bourbon Street.

The present head chef at Arnaud's is Tommy DiGiovanni, who was born and raised in New Orleans.

Arnaud's restaurant was one of the first restaurants to reopen after Hurricane Katrina, which ripped through New Orleans in late August 2005. The restaurant opened its doors again three months after the storm in November. "Many of our long-time employees have returned and we'll all be celebrating ... the full menu will be available, Arnaud's is an experience and we wanted to be true to our quality standards." said owner Archie Casbarian.[this quote needs a citation]

Arnaud's has 14 different private dining rooms, Mezzanine, Creole Cottage, Bourbon Suites, Edison Park, 1920, Iberville, Bienville, Toulouse, Dauphine, Lafitte, Bacchus, Gold, Irma, and Count's. Each of these room is furnished with different antiques, chandeliers, and drapes. The rooms are able to hold up to 220 people, and can be reserved for any occasion. 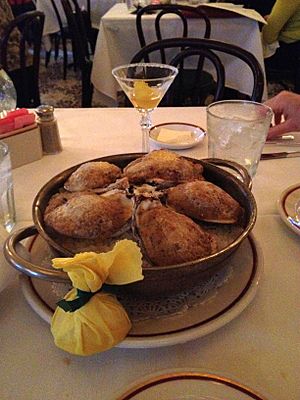 Arnuad's is one of the few restaurants left in New Orleans to serve classic Creole food. Creole is an ethnic food of New Orleans, derived from French cuisine with much butter, pepper, salt, and herbs. The base ingredients in Creole and Cajun foods are the "Holy Trinity", a mirepoix of onions, bell peppers, and celery, which is cooked in a roux of butter and flour. It is traditionally not as spicy as the Cajun version.

The Germaine Cazenave Wells Mardi Gras Museum opened in 1983 and contains Mardi Gras artifacts all accumulated by Germaine Wells, the daughter of the original Arnaud, and the person for whom the museum is named.

The French 75 Bar that lies next to the main dining room of Arnaud's was strictly a gentlemen-only area when the Cazenave family owned the restaurant. The bar reverted to its original name, French 75 Bar, after being renovated in 2003.

All content from Kiddle encyclopedia articles (including the article images and facts) can be freely used under Attribution-ShareAlike license, unless stated otherwise. Cite this article:
Arnaud's Facts for Kids. Kiddle Encyclopedia.