Antoine's is a Louisiana Creole cuisine restaurant located at 713 rue St. Louis (St. Louis Street) in the French Quarter of New Orleans, Louisiana. It is one of the oldest family-run restaurants in the United States, having been established in 1840 by Antoine Alciatore. A New Orleans institution, it is notable for being the birthplace of several famous dishes, such as Oysters Rockefeller, Pompano en Papillote, Eggs Sardou and Pigeonneaux Paradis. Antoine's Cookbook, compiled by Roy F. Guste (the fifth-generation proprietor) features hundreds of recipes from the Antoine's tradition. It is also known for its VIP patrons including several U.S. presidents and Pope John Paul II.

Antoine's features a 25,000 bottle capacity wine storage and 15 dining rooms of varying sizes and themes, with several featuring Mardi Gras krewe memorabilia. The lengthy menu (originally only in French, now in French and English) features classic French-Creole dishes. By tradition, it's closed to the general public on Thanksgiving, Christmas, and Mardi Gras. It can be reserved for private parties on these "Closed Days". Advance reservations are required for dining during Mardi Gras and on weekends. The executive chef as of March 2020 is Rich Lee. 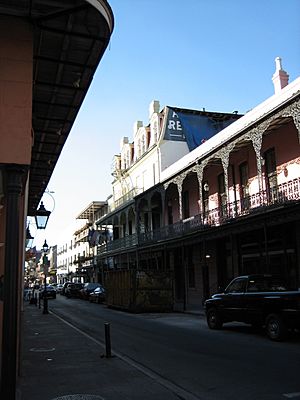 A tarp over damaged wall of Antoine's, October 2005

The French Quarter was above the flooding that devastated the majority of New Orleans in the aftermath of Hurricane Katrina in 2005 (see: Effects of Hurricane Katrina in New Orleans), but Antoine's suffered from the hurricane winds which damaged part of the roof and knocked down a section of exterior wall. The extensive contents of Antoine's wine cellar were also lost due to a failure in the climate-control system; as of June 2006, the cellar is slowly being replenished, $10,000 per week being devoted to new purchases. The restaurant was able to reopen on December 29, 2005. In the wake of Katrina, Antoine's has added its first-ever Sunday Jazz Brunch program. Two years after Katrina, the restaurant nearly declared bankruptcy due to zero customer base but managed to hold on. It is currently one of the best restaurants in New Orleans in terms of revenue and customer patronage.

All content from Kiddle encyclopedia articles (including the article images and facts) can be freely used under Attribution-ShareAlike license, unless stated otherwise. Cite this article:
Antoine's Facts for Kids. Kiddle Encyclopedia.