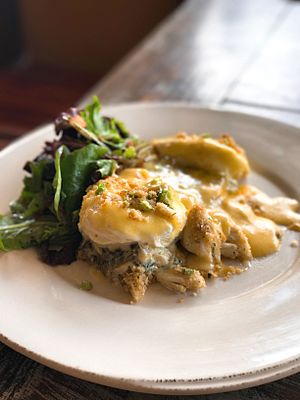 Eggs Sardou is a Louisiana Creole cuisine dish made with poached eggs, artichoke bottoms, creamed spinach and Hollandaise sauce. It is on the menu of many Creole restaurants in New Orleans, including Antoine's, where eggs Sardou was invented, and Brennan's. Eggs Sardou is named for Victorien Sardou, a famous French dramatist of the 19th century, who was a guest in New Orleans when the dish was invented.

Cooked fresh spinach is creamed with a bechamel sauce, a drop or two of Tabasco sauce is added, and pre-cut artichoke bottoms are warmed in a 175°F oven for five to ten minutes. The eggs Sardou are assembled by placing spoonfuls of the warm creamed spinach on a warmed plate. The artichoke bottoms are placed on top of the creamed spinach and the poached eggs are set inside the artichoke bottoms. The assembly is then covered in the Hollandaise sauce. Some cooks omit nutmeg and cloves from the bechamel sauce when using it to cream spinach for eggs Sardou. Eggs Sardou can also be served with truffles, ham and anchovies.

Eggs Sardou should be served at once, while the spinach, artichokes, poached eggs and Hollandaise sauce are still warm. For this reason, a warmed plate or bowl is recommended in most recipes. The garnish, if any, should be something of a color that contrasts well with the yellow Hollandaise sauce that tops the dish. This may be anything from crumbled bacon or a small dice of ham to a simple sprinkle of paprika. If served as an appetizer course, no side dishes are needed. If served at brunch, or as an entree, the side dishes should be such that they do not overpower the muted, carefully blended flavors of the eggs, spinach, and sauce. If wine is to be served, it should be white, preferably a slightly sweet white wine.

All content from Kiddle encyclopedia articles (including the article images and facts) can be freely used under Attribution-ShareAlike license, unless stated otherwise. Cite this article:
Eggs Sardou Facts for Kids. Kiddle Encyclopedia.