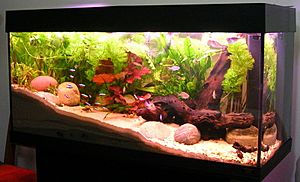 Fishkeeping is a popular hobby, done by aquarists. It is concerned with keeping fish in a home aquarium or garden pond. Fish have been raised as food in pools and ponds for thousands of years.

Fishkeeping can be divided into three disciplines, depending on the type of water the fish came from. They are freshwater, brackish, and saltwater fishkeeping.

Freshwater fishkeeping is the most popular type of fishkeeping. Small pet stores often sell many types of freshwater fish such as goldfish, guppies, and angelfish. Many fishkeepers create freshwater aquascapes where there are lots of aquatic plants as well as fish.

All content from Kiddle encyclopedia articles (including the article images and facts) can be freely used under Attribution-ShareAlike license, unless stated otherwise. Cite this article:
Fishkeeping Facts for Kids. Kiddle Encyclopedia.