Flag of Bhutan facts for kids 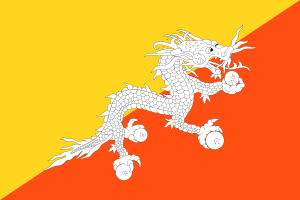 The flag of Bhutan

It has divided diagonally from the lower hoist-side corner to the upper fly-side corner; the upper triangle is yellow and the lower triangle is orange, with a white dragon called the Druk (the Thunder Dragon) holding four jewels (norbu) in its claws centered along the dividing line and facing away from the hoist.

All content from Kiddle encyclopedia articles (including the article images and facts) can be freely used under Attribution-ShareAlike license, unless stated otherwise. Cite this article:
Flag of Bhutan Facts for Kids. Kiddle Encyclopedia.