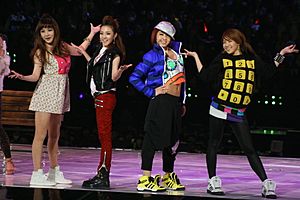 2NE1 (Korean: 투애니원) was a K-pop of girl group from South Korea. They were formed in 2009 and split in 2016. They are best known for their nine number one hit songs on the Gaon Digital Chart. These included "Try to Follow Me", "Go Away", "Lonely", "I Am the Best", "Ugly", "I Love You", "Falling in Love", "Missing You", and "Come Back Home". Before their split, 2NE1 was one of the most successful girl groups in South Korea.

Their second single "I Don't Care" was released on 1 July 2009."I Don't Care" received great success, topping various Korean music shows and was also the most downloaded song of the year 2009. By the end of 2011 the song has sold 4,503.928 digital copies, becoming one of the most successful singles of all-time in Korea .

After their album, Crush in 2014, the group mysteriously became inactive for 2 years. Minzy left in March 2016, while the rest of the group broke up in November 2016.

All content from Kiddle encyclopedia articles (including the article images and facts) can be freely used under Attribution-ShareAlike license, unless stated otherwise. Cite this article:
2NE1 Facts for Kids. Kiddle Encyclopedia.