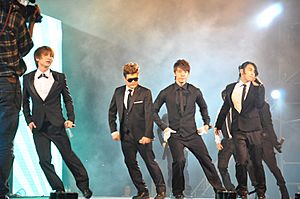 Super Junior at the MTV Exit Hanoi Concert in 2010.

S.M. Entertainment is a record label and talent agency in South Korea. It is one of the main entertainment businesses in Korea. It was founded by Lee Su-man, a former singer. It was originally focused solely on entertainment management. Since then, however, they have expanded their business interests to establishing subsidiary companies and incorporating affiliates. They have foreign subsidiaries, such as S.M. Japan, Asia, and USA.

All content from Kiddle encyclopedia articles (including the article images and facts) can be freely used under Attribution-ShareAlike license, unless stated otherwise. Cite this article:
S.M. Entertainment Facts for Kids. Kiddle Encyclopedia.