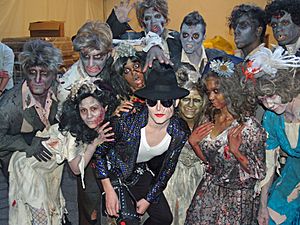 An impersonator is someone who imitates or copies the behaviour or actions of another. There are many reasons for impersonating someone:

Celebrity impersonators are entertainers who look similar to celebrities and dress in such a way as to imitate them. Impersonators are known as look-alikes, impressionists, imitators tribute artists and wannabees. The interest may have originated with the need or desire to see a celebrity who has died. One of the most prominent examples of this phenomenon is the case of Elvis Presley. There are claimed to be more Elvis impersonators and tribute artists in the world than for any other celebrity.

All content from Kiddle encyclopedia articles (including the article images and facts) can be freely used under Attribution-ShareAlike license, unless stated otherwise. Cite this article:
Impersonator Facts for Kids. Kiddle Encyclopedia.