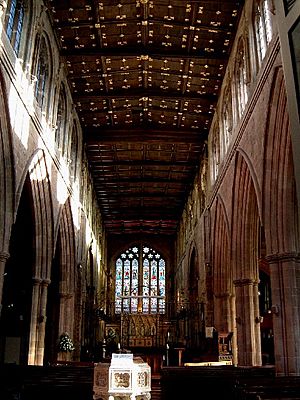 The Church of St Editha is an Anglican parish church and Grade I listed building in Tamworth, Staffordshire, England.

The church of St. Editha is the largest medieval parish church in Staffordshire. Most of the church is mid- to late-14th-century and 15th-century work with some 19th-century additions.

The present building stands upon the ground where successive churches have stood since the eighth century. The first church was destroyed, along with the town, by the Danes in 874 and it was not until the time of Ethelfleda that a second church arose. The Danes ruined this church in 943 and it was King Edgar who re-founded it around 963. Editha was probably King Edgar's aunt who died in the 960s and was canonized shortly after for her life of devotion and piety and then made the Patron Saint of the now collegiate church.

In 1345 the town and church were destroyed by fire and so began a rebuilding, being the fourth (present) church. Begun in 1350 and completed in 1369, this edifice is a monument to the man whose task it became to rebuild and enlarge the church, Dean Baldwin de Witney.

The College of Canons of St. Editha was probably a royal foundation in the 10th century, although the date of foundation is unknown. Although the right to appoint Canons was disputed, by the 12th century, all appointments were Royal. There were a Dean and six prebendaries.

The college was dissolved in 1548 under the terms of the Dissolution of Colleges Act 1547 and the church became the parish church for the town of Tamworth.

Samuel Parkes (c.1815–1864) was baptised here on 24 December 1815. He won the Victoria Cross in the Charge of the Light Brigade for saving the life of Trumpeter Hugh Crawford. His parents Thomas Park(e)s and Lydia Fearn are buried in the churchyard and commemorated by a tombstone.

The church was extensively restored by Benjamin Ferrey and George Gilbert Scott in the 1850s, and William Butterfield, ca. 1871. There is a rare example of a double spiral staircase in the tower, the only others being in the Château de Chambord, France and All Saints Church, Pontefract. 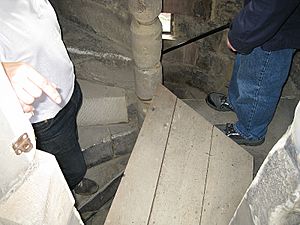 There are medieval fragments in the vestry east window. The chancel east window dates from 1870, by William Wailes.

There are south clerestory windows of 1873, by Ford Madox Brown for Morris and Co.

The chapel east window of 1874 is by Edward Burne-Jones for Morris and Co.

The church has an historic pipe organ dating from 1766. The first instrument was installed by Nathaniel Dudley. Samuel Green built a new organ in 1792, taking the Dudley organ to Isleworth in South West London. Alexander Buckingham added a chair/choir division in 1809 and a pedal division was added by William Hill in 1841. Further work was carried out by George Holdich, Brycesons Bros and finally Nicholsons of Worcester. A new organ was built in 1927 by Harrison and Harrison incorporating much of the old pipework and is expected to be restored in 2009/2010. A specification from 1929 can be found on the National Pipe Organ Register. 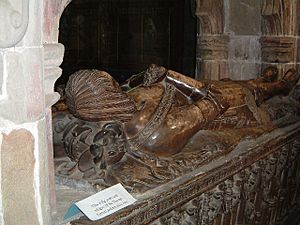 Tomb of Sir Thomas Ferrers and his wife Ann

In 1929, Henry Rose appointed the then 13-year-old Sir Ernest Titterton as assistant organist. Titterton later went on to help develop the atomic bomb.

All content from Kiddle encyclopedia articles (including the article images and facts) can be freely used under Attribution-ShareAlike license, unless stated otherwise. Cite this article:
Church of St Editha, Tamworth Facts for Kids. Kiddle Encyclopedia.