Flin Flon (pop. 5,185 in 2016 census; 4,982 in Manitoba and 203 in Saskatchewan) is a mining city, located on a correction line on the border of the Canadian provinces of Manitoba and Saskatchewan, with the majority of the city located within Manitoba. Residents thus travel southwest into Saskatchewan, and northeast into Manitoba. The city is incorporated in and is jointly administered by both provinces.

Flin Flon was founded in 1927 by Hudson Bay Mining and Smelting (HBM&S) to exploit the large copper and zinc ore resources in the region. In the 1920s, HBM&S invested in a railway, mine, smelter, and a hydroelectric power plant at Island Falls, Saskatchewan. By 1928 the rail line reached the mine.

The town grew considerably during the 1930s as farmers, who were impoverished by the Great Depression, abandoned their farms and came to work at the mines. The municipality was incorporated on January 1, 1933, and in 1970, the community reached city status. The city has continued to be a mining centre with the development of several mines adding to its industrial base, although its population has been in decline. With a scenic setting and a number of nearby lakes, Flin Flon has also become a moderately popular tourist destination. 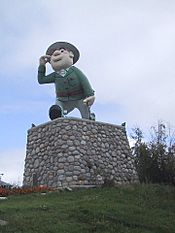 The town is named after the fictional character Josiah Flintabbatey Flonatin

The town's name is taken from the lead character in a paperback novel, The Sunless City by J. E. Preston Muddock. Josiah Flintabbatey Flonatin piloted a submarine through a bottomless lake where he passed into a strange underground world through a hole lined with gold. A copy of the book was allegedly found and read by prospector Tom Creighton.

When Tom Creighton discovered a high-grade exposure of copper, he thought of the book and called it Flin Flon's mine, and the town that developed around the mine adopted the name. Flin Flon shares with Tarzana, California, the distinction of being named after a character in a science fiction novel.

The character of "Flinty", as he is locally known, is of such importance to the identity of the city that the local Chamber of Commerce commissioned the minting of a $3.00 coin which was considered legal tender amongst locally participating retailers during the year following its issue. A statue representing Flinty was designed by cartoonist Al Capp and is one of the points of interest of the city. In 1978, the National Film Board of Canada produced the short documentary Canada Vignettes: Flin Flon about the origin of the city's name. 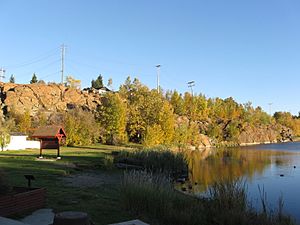 Flin Flon in the fall 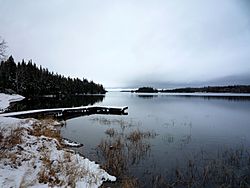 Lake Athapapuskow, near Bakers Narrows Provincial Park and the airport; the photo was taken in late May, demonstrating that snow is possible (though unlikely) even that late in the year.

The town of Creighton, Saskatchewan, is immediately adjacent to Flin Flon. Nearby lakes include Kipahigan Lake.

The majority of Flin Flon's surface topology is exposed Canadian Shield bedrock, hence the nickname "the city built on rock". Due to this and climatic factors, agriculture is generally not possible, although grain farming is found 130 kilometres (80 mi) southeast in The Pas, Manitoba. 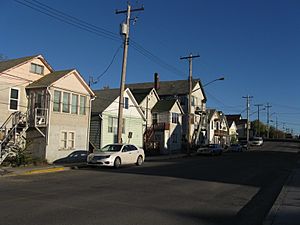 The city operates Flin Flon Airport, which is located southeast of the city, immediately west of the Bakers Narrows Provincial Park. The airport has a single asphalt runway, and has regular flights to and from Winnipeg through Calm Air. There is also an airport in nearby Channing, MB for small aircraft use.

The Hudson Bay Railway operates railway freight service on its railway line between The Pas and Flin Flon.

The rail line to Churchill was washed out in June 2017 and remained out of service for over a year when then-owner Omnitrax refused to repair it. The City of Flin Flon purchased shares in One North, one of the partners of purchasing consortium Arctic Gateway Group Limited Partnership. The rail line was subsequently repaired by Cando Rail Services and Paradox Access Solutions.

Flin Flon has an active local arts & culture scene. The Flin Flon Arts Council has been instrumental in building the local arts scene of late, and has also brought high-quality performers, such as the Royal Winnipeg Ballet, into the community for special events. The R.H. Channing Auditorium in the Flin Flon Community Hall often hosts concerts and theatrical performances, including those produced by the local theatre troupe "Ham Sandwich".
In 2010, the Northern Visual Arts Centre (or NorVA) was established as a studio and gallery space for local visual artists. NorVA frequently hosts workshops, concerts and other community arts-based events.
Every two years, the Flin Flon Community Choir, directed by Crystal Kolt, performs a musical production for the community. In 2013, the Flin Flon Community Choir presented Chicago: The Musical, to great acclaim. Past performances have included Beauty and the Beast, Fiddler on the Roof, and Bombertown, among many others.
Culture Days, a national festival celebrating arts and culture, is a popular event in Flin Flon. Culture Days is held on the last weekend of September each year. In 2013, Flin Flon ranked seventh in the country for the number of free events (including concerts, workshops, artist talks and kids' activities) offered to community members and visitors. 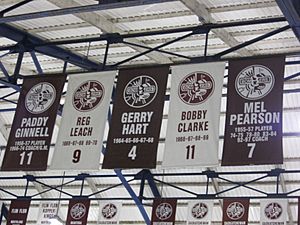 Retired jerseys that include some NHL greats 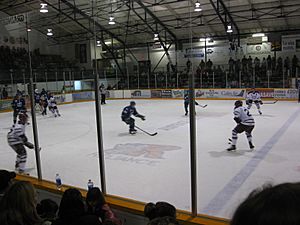 Flin Flon is the home of the Flin Flon Bombers of the Saskatchewan Junior Hockey League and the birthplace of NHL great and Hall of Fame member Bobby Clarke. As captain of the team, he led the Philadelphia Flyers to NHL Championships in the 1970s, and was also a star on Team Canada 1972 in the Summit Series. Other NHLers hailing from Flin Flon include Ken Baird, Ken Baumgartner, Matt Davidson, Kim Davis, Dean Evason, Al Hamilton, Ted Hampson (who was the second player to ever receive the Bill Masterton Memorial Trophy), Gerry Hart, Ron Hutchinson, George Konik, Ray Maluta, Tom Gilmore, Dunc McCallum, Eric Nesterenko, Mel Pearson, Reid Simpson, David Struch, and Ernie Wakely.

Flin Flon has a small restaurant scene, which reflects the size of the town's population. However, in recent times it has earned for itself a unique position in the Prairie culinary scene with hybrid meals. Famous in this respect is the Saucisse de Toulouse and poutine, a dish used to celebrate important days like Canada Day.

Prior to the smelter closure in June 2010 (seen here with its 251m-high stack), pollution was a major issue as demonstrated by the yellow trail, which was seeded by the aerosols from the copper smelter.

The economy of Flin Flon is and has always been primarily reliant on base metal production (primarily copper and zinc with lesser gold and silver). Since the late 1910s, approximately 17 mines have operated in the Flin Flon vicinity, with the only remaining mine in operation being the 777 Mine, with a planned closure of May 2022.

Sphalerite (zinc) concentrate is produced and processed on-site to refined zinc while chalcopyrite (copper) concentrate is produced and sold for external copper production, a result of the closure of the Hudbay smelter in July 2010. Although processing of any sulphide material usually emits large amounts of sulfur dioxide, the Hudbay plant uses a zinc pressure leaching (ZPL) process which greatly reduces emissions. 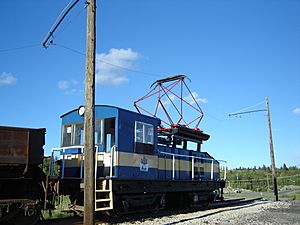 A DC Electric Locomotive, used at the main plant, is on display at the Flin Flon Museum.

In 2009, Prairie Plant Systems discontinued operation at the mine due to the expiry of their lease and the uncertainty regarding the pending closure of the mine, which occurred in 2011.

All content from Kiddle encyclopedia articles (including the article images and facts) can be freely used under Attribution-ShareAlike license, unless stated otherwise. Cite this article:
Flin Flon Facts for Kids. Kiddle Encyclopedia.