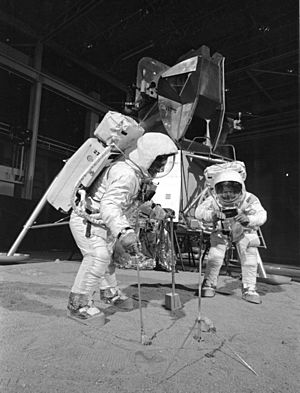 Astronauts Buzz Aldrin and Neil Armstrong in NASA's training mockup of the Moon and lander module. Conspiracy theorists say that the films of the missions were made using sets similar to this training mockup.

The moon landing conspiracy theories (also known as moon landing hoax or Apollo hoax) are beliefs that men did not land on the Moon in 1969–1972 during the Apollo program and that NASA faked the information. Some conspiracy theorists believe the Skylab space station is also a hoax.(p. 162)

This belief is considered by the scientific community and historians to be irrational. But on the internet, the debate can occur since it is easy for anyone to publish their ideas. There are subcultures within the USA and cultures around the world that believe that the Moon landings were faked. This view is claimed to have been taught in Cuban schools and wherever else Cuban teachers are sent (Nicaragua, Angola). It is also shared by the Taliban and by the International Society for Krishna Consciousness (ISKCON).

On 12 April 1961, the USSR sent the first man into space in Vostok 1, Yuri Gagarin. Six weeks later, US President John Kennedy promised a manned Moon landing by 1969 to win the battle of systems and impress the world with technical superiority:

Finally, if we are to win the battle that is now going on around the world between freedom and tyranny, the dramatic achievements in space which occurred in recent weeks should have made clear to us all, as did the Sputnik in 1957, the impact of this adventure on the minds of men everywhere, who are attempting to make a determination of which road they should take.

Moon conspiracy theorists say that NASA had too many technical problems to meet the eight year deadline for going to the moon. But the USA could not afford to appear lose the race to the moon to the Soviet Union, and so the moon landings were faked. In 2004, President George Bush gave not eight but sixteen years for a manned return to the Moon, even though the technologies for it should have already been developed forty years earlier. In 2010, President Barack Obama canceled this plan, which seemed to the moon conspiracy theorists to be an admission that the USA still does not have the technology to go to the moon.

Doubts about the authenticity of the Apollo Moon landings appeared first in December 1968 when Apollo 8 was launched. The almost perfectly executed odyssey of Apollo 11 amazed many around the world, and some people doubted it was real.

The first book on the subject ("Did man land on the Moon?") was issued in Texas by the mathematician James J. Cranny in 1970.

When Fox TV aired Bruce Nash's film "Conspiracy theory: Did we land on the Moon?" in 2001, NASA released hoax theory rebuttal materials on their web and FTP sites. They also wrote suggestions for science teachers on how to refute the hoax claims using the Lunar Sample Disk Kits.

In 2002, NASA hired James Edward Oberg, to write a book intended to challenge those who claim the Apollo Moon landings were a hoax. Oberg was a former rocket scientist, MSNBC News space consultant and analyst and journalist, and, it was later discovered, a moon landing conspiracy theorist. But NASA soon cancelled the project, declining to give the reasons for this. NASA spokesman Bob Jacobs said criticism that NASA was displaying poor judgement and a lack of confidence in commissioning the book caused the agency to abort it. For example, then NASA Administrator Sean O'Keefe said:

In 2006, some of the recordings of the Apollo era were declared missing. The question of what happened to the recordings was seen by conspiracy theorists as confirmation of their beliefs, and in 2009, NASA revealed that the tapes were erased.

The arguments about the moon conspiracy theories are detailed and complex. Some of the major points and counterpoints are listed below.

Moon conspiracy theorists think that NASA faked the Apollo mission with a secret program. According to James Longuski, the complexity of the conspiracy theory scenarios make them impossible. More than 400,000 people worked on the Apollo project for almost ten years, and 12 men who walked on the Moon returned to Earth to talk about their experiences. Hundreds of thousands of people would have had to keep the secret. Longuski says that it would have been a lot easier to actually land on the Moon than to create such a large conspiracy to fake it.

1. In some photos, the crosshairs are seemed to be partially covered by objects. Some conspiracy theorists suggest that the NASA composed the photographs by "cutting and pasting" objects over the background images.

An example of "partially covered" crosshair.

2. In some photos, the crosshairs are rotated.

An example of "rotated" crosshairs.

3. The letter "C" appears on some rocks. This is maybe a designation by the studio props.

4. The book Moon Shot contains a fake photo of Alan Shepard hitting a golf ball on the Moon with another astronaut.

1. The Apollo 16 crew could not have survived solar flares when they were on their way to the Moon.

David Scott drops a hammer and a feather on the Moon.

Blueprints and drawings of the machines used in the Apollo project are missing. Some Apollo 11 tapes containing telemetry and high quality video of the first moonwalk are also missing. Moon landing conspiracy theorists believe that this is because they never existed, since the mission was faked.

Dr. David Williams (NASA archivist at Goddard Space Flight Center) and Apollo 11 flight director Eugene F. Kranz acknowledged that some of the Apollo 11 tapes are missing. When the recordings were sent back to Earth to be shown on TV, they were converted to a different format which was lower quality. Now the lower quality tapes are available, but the original high quality videos received in Australia are missing. Some pictures of the original high quality image are still available, and videos have been released from other missions too, like the Apollo Lunar Surface Experiments Package.

Some people at NASA are looking for the tapes to help them plan for future missions. They believe the Apollo 11 tapes were sent for storage at the U.S. National Archives in 1970, but by 1984 all the Apollo 11 tapes had been returned to the Goddard Space Flight Center. The tapes may have been stored rather than re-used, and efforts to determine where they were stored are ongoing. Goddard was storing 35,000 new tapes per year in 1967, even before the lunar landings.

On November 1, 2006 Cosmos Magazine reported that 100 data tapes recorded in Australia during the Apollo 11 mission had been found in the basement of the Curtin University of Technology in Perth, Australia. One of the old tapes was sent to NASA for analysis.

On July 16, 2009, NASA said that it must have erased the original Apollo 11 Moon footage years ago so that it could reuse the tape. On December 22, 2009 NASA issued a final report on the tapes. Senior engineer Dick Nafzger concluded that approximately 45 tapes of Apollo 11 video were erased and reused. For the 40th anniversary of the Apollo moon landing, Lowry Digital of Burbank, California restored the low quality videos. Some pieces of the restored footage are available on the NASA website.

All the deaths except for Irwin's were related to their job with NASA or the Air Force. Mike Adams and Robert Lawrence were not involved with the civilian space program. James Irwin already had several heart attacks before his death. All except two of the deaths happened at least one or two years before Apollo 11. Also, Brian Welch was speaking out against the moon hoax, so he would not have been a good target to be killed.

Additionally, the chief of their spaceflight program, Sergei Korolev, died in January 1966.

A later LRO photo of the Apollo 14 landing site

Conspiracy theorists say that telescopes, for example the Hubble, should be able to take pictures of the moon where Apollo landed, and if people really did land on the moon, then the pictures should show the scars on the moon's surface and equipment it left behind. They believe that our major observatories will not take pictures of the landing sites because it would expose the cover-up.

NASA has said that images have been taken of these landing sites, but the pictures taken by Hubble are too low quality to see very much detail. In 2009 NASA released pictures from the Lunar Reconnaissance Orbiter showing the Apollo landing sites in more detail. These photographs have not convinced the conspiracy theorists because the pictures were taken by NASA, and they think NASA is behind the cover-up.

On January 27, 1967, Apollo 1 caught fire and killed 3 astronauts. Two years later, NASA said that the problems which caused the fire were fixed. Bart Sibrel believes that the problems could not be fixed, so NASA decided to fake the landings to win the Moon race.

NASA says that the Soviet Union's achievements were not as impressive as the United States. According to the Encyclopaedia Astronautica, the US spent 1,864 hours in space, while the Soviets spent 697 hours at the completion of Soyuz 5. Apollo 7 launched in October 1968, 21 months after the Apollo 1 fire, with an astronaut on board. By Apollo 11, the Uninted States' lead was even bigger.

Both the United States and the Soviet Union had many problems during the Moon race. The Soviet Union had the first in-flight death in 1967, only 3 months after the Apollo 1 fire. According to NASA, most of the accomplishments first made by the Soviets were also made by the US within a year. By 1965, the US started to beat the Soviets to a few important steps. The Soviets had never developed a rocket which could land on the Moon, and they never tested landing on the Moon with an astronaut on board.

Some conspiracy theorists say that the Moon rocks collected by the Apollo Program are actually meteorites from Antarctica. Wernher von Braun, the Marshall Space Flight Center Director, and three others traveled to Antarctica in 1967 (three years before the Apollo launch) to explore for future space missions. Some conspiracy theorists believe that Braun collected meteorites during this trip to use as fake moon rocks.

The Apollo Program collected 380 kilograms (840 pounds) of moon rocks during the Apollo 11, 12, 14, 15, 16, and 17 missions. According to scientists around the world, these rocks are very different from meteorites and other rocks found on Earth. The rocks are also 200,000,000 (200 million) years older than any rock found on Earth, and are similar to moon rocks later brought back by the USSR.

Some moon rocks could have been collected without landing on the moon, but the first moon rock was found on Earth in 1979, and it was only discovered in 1982 that it came from the moon. Also, moon rocks are very rare on Earth, and only 30 kilograms (66 pounds) have ever been discovered, while the Apollo missions brought back 380 kilograms.

In 2004, Martin Hendry and Ken Skeldon from the University of Glasgow investigated the 'Moon Hoax'. In November 2004, they spoke at the Glasgow Science Centre and examined the top ten lines of evidence that a hoax had taken place.

All content from Kiddle encyclopedia articles (including the article images and facts) can be freely used under Attribution-ShareAlike license, unless stated otherwise. Cite this article:
Moon landing conspiracy theories Facts for Kids. Kiddle Encyclopedia.