James Brolin born Craig Kenneth Bruderlin, July 18, 1940 is an American actor, producer, and director, best known for his roles in film and television, including sitcoms and soap operas. He is the father of actor Josh Brolin and husband of Barbra Streisand. Brolin has won two Golden Globes and an Emmy. He received a star on the Hollywood Walk of Fame on August 10, 2016.

Brolin was born in Westwood, Los Angeles, California. The eldest of two brothers and two sisters. As a young child, he was apparently more interested in animals and airplanes, which he began building and flying when he was 10, than in acting. Brolin graduated from high school in 1958, and his family was already encouraging him to become an actor.

Brolin attended Santa Monica City College and studied drama at the University of California at Los Angeles before getting a contract with 20th Century Fox in 1960. At Fox, he started out as a contract player in Sandra Dee movies. At the age of 20, he changed his surname from "Bruderlin" to "Brolin" to become James Brolin.

During the 1970s, the 6 ft 4 inch Brolin began appearing in leading roles in films. By the mid 1970s, he was a regular leading man in films. When Roger Moore expressed his desire to leave the role of James Bond, Brolin screen tested for the role in the next film Octopussy (1983). Ultimately, however, Moore decided to continue in the series. 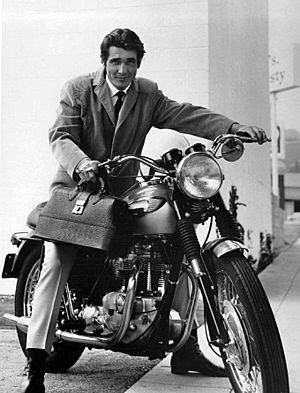 In 1968, Brolin transferred to Universal Studios, where he auditioned for a co-starring role opposite seasoned actor Robert Young in the popular medical drama Marcus Welby, M.D. (1969–1976). The series was one of the top-rated television shows of the day. In its first season in 1970, Brolin won the Emmy Award for Outstanding Performance by an Actor in a Supporting Role, and was subsequently nominated three more times. He was also nominated for Golden Globes three times for Best Supporting Actor, and won twice between 1971 and 1973.

As the new decade approached, Brolin starred in both Angel Falls for CBS and Extreme for ABC, although neither matched the popularity of his earlier series.

Brolin has had a number of supporting roles in major cinema releases since 2000. He is currently playing the role of John, the family patriarch, in the CBS comedy Life in Pieces. 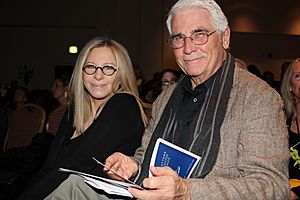 In 1966, he married Jane Cameron Agee, an aspiring actress at Twentieth Century Fox, 12 days after they first met. The couple had two children. They were divorced in 1984. In 1985, Brolin met actress Jan Smithers on the set of Hotel, and they married in 1986. The couple had a daughter, Molly Elizabeth (b. 1987). Jan Smithers filed for divorce from Brolin in 1995.

In 1996, Brolin met Barbra Streisand through a friend, and they married on July 1, 1998. The couple reside in Malibu, California. Brolin is the stepfather of Streisand's only son, Jason Gould.

All content from Kiddle encyclopedia articles (including the article images and facts) can be freely used under Attribution-ShareAlike license, unless stated otherwise. Cite this article:
James Brolin Facts for Kids. Kiddle Encyclopedia.