After years as a struggling actress, Watts came to attention in David Lynch's psychological thriller Mulholland Drive (2001). The following year, she enjoyed box-office success with her role as Rachel Keller in The Ring (2002), the remake of a successful Japanese horror film. She then received nominations at the Academy Awards and the Screen Actors' Guild Awards in the Best Actress categories for her portrayal of Cristina Peck in Alejandro González Iñárritu's neo-noir 21 Grams (2003). Her subsequent films include David O. Russell's comedy I Heart Huckabees (2004), King Kong (2005), a remake of the 1933 film of the same name, the crime-thriller Eastern Promises (2007), and the Tom Tykwer-directed thriller The International (2009). Since then, Watts has portrayed Valerie Plame Wilson in the biographical drama Fair Game (2010) and Helen Gandy in Clint Eastwood's biographical drama J. Edgar (2011). For her leading role as Maria Bennett in the disaster film The Impossible (2012), she received further nominations for the Academy Award and Screen Actors Guild Award for Best Actress and a nomination for the Golden Globe Award for Best Actress.

In 2002, Watts was included in People magazine's 50 Most Beautiful People. In 2006, she became a Goodwill Ambassador for Joint United Nations Programme on HIV/AIDS, which helps to raise awareness of AIDS-related issues. She has participated in several fundraisers for the cause, and she is presented as an inaugural member of AIDS Red Ribbon Awards. 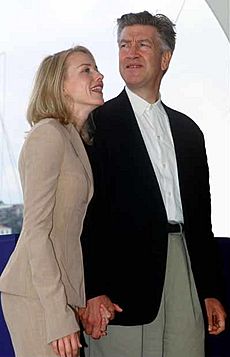 Watts with filmmaker David Lynch at the 2001 Cannes Film Festival 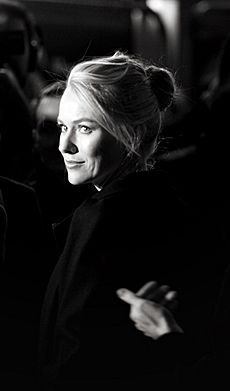 Watts at the London premiere of Eastern Promises in 2007.

Watts was born on 28 September 1968, in Shoreham, Kent, England. She is the daughter of Myfanwy ("Miv") Edwards (née Roberts), an antiques dealer and costume and set designer, and Peter Watts (1946–1976), a road manager and sound engineer who worked with Pink Floyd. Miv was born in England but lived in Australia between the ages of one and seven. Watts' maternal grandfather was Welsh and her maternal grandmother was Australian.

Watts' parents divorced when she was four years old. After the divorce, Watts and her elder brother, Ben Watts, moved several times across South East England with their mother. Peter Watts left Pink Floyd in 1974, and he and Myfanwy were later reconciled. Two years later he died.

Following his death, Watts' mother moved the family to Llanfawr Farm in Llangefni and Llanfairpwllgwyngyll, towns on the island of Anglesey in North Wales, where they lived with Watts' maternal grandparents, Nikki and Hugh Roberts, for three years. During this time, Watts attended a Welsh language school, Ysgol Gyfun Llangefni. She later said of her time in Wales: "We took Welsh lessons in a school in the middle of nowhere while everyone else was taking English. Wherever we moved, I would adapt and pick up the regional accent. It's obviously significant now, me being an actress. Anyway, there was quite a lot of sadness in my childhood, but no lack of love." In 1978, her mother remarried (though she would later be divorced again) and Watts and her brother then moved to Suffolk, where she attended Thomas Mills High School. Watts has stated that she wanted to become an actress after seeing her mother performing on stage and from the time she watched the 1980 film Fame.

In 1982, when Watts was 14, she moved to Sydney, New South Wales in Australia with her mother, brother and stepfather. Myfanwy established a career in the burgeoning film business, working as a stylist for television commercials, then turning to costume design, ultimately working for the soap opera Return to Eden. After emigrating, Watts was enrolled in acting lessons by her mother; she auditioned for numerous television advertisements, where she met and befriended actress Nicole Kidman. Watts obtained her first role in the 1986 drama film, For Love Alone, based on the novel of the same name by Christina Stead, and produced by Margaret Fink.

She decided to become a model when she was 18. She signed with a models agency that sent her to Japan, but after several failed auditions, she returned to Sydney. There, she was hired to work in advertising for a department store, that exposed her to the attention of Follow Me, a magazine which hired her as an assistant fashion editor. A casual invitation to participate in a drama workshop inspired Watts to quit her job and to pursue her acting ambitions.

Regarding her nationality, Watts has stated: "I consider myself British and have very happy memories of the UK. I spent the first 14 years of my life in England and Wales and never wanted to leave. When I was in Australia I went back to England a lot." She also has expressed her ties to Australia, declaring: "I consider myself very connected to Australia, in fact when people say where is home, I say Australia, because those are my most powerful memories." 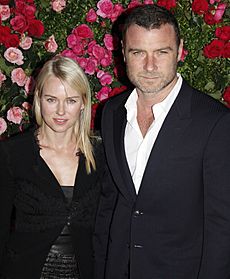 Watts with her then-partner Liev Schreiber in 2012

Watts was in a relationship with actor Heath Ledger from August 2002 to May 2004. In the spring of 2005, Watts began a relationship with actor Liev Schreiber. The couple's first son, Alexander "Sasha" Pete, was born in July 2007 in Los Angeles, and their second son, Samuel "Sammy" Kai, in December 2008 in New York City. On 26 September 2016, Watts and Schreiber announced their separation, after 11 years together.

All content from Kiddle encyclopedia articles (including the article images and facts) can be freely used under Attribution-ShareAlike license, unless stated otherwise. Cite this article:
Naomi Watts Facts for Kids. Kiddle Encyclopedia.