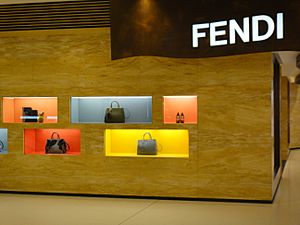 Fendi is an Italian luxury fashion house producing fur, ready-to-wear, leather goods, shoes, fragrances, eyewear, timepieces and accessories. Founded in 1925 in Rome, Fendi is known for its fur and fur accessories, and for its leather goods such as "Baguette", 2jours, Peekaboo or Pequin handbags.

The house of Fendi was launched in 1925 by Adele and Edoardo Fendi as a fur and leather shop in Via del Plebiscito, Rome. Since 1946, the five second generation sisters (Paola, Anna, Franca, Carla and Alda) joined the company. Karl Lagerfeld joined Fendi in 1965 and became the creative director for fur and women's ready-to-wear (launched in 1977). Silvia Venturini Fendi, daughter of Anna, joined in 1994 and is the creative director for accessories and men's lines. Since 2001, Fendi became a multinational brand and a member of LVMH group.

In 2014, Fendi started making plans to use drones to show its catwalk fashions.

In 2015, Fendi discontinued all of the Fendi fragrances. "The commercial development of Fendi perfume did not meet the expectations of the company."

Also in 2015, Fendi funded the restoration of the Trevi Fountain in Rome, and held the company’s 90th anniversary show over the fountain using a plexiglas floor. Fendi signed a partnership with the Galleria Borghese to support the museum's exhibitions for the following three years. In 2017, Fendi released a customization shop in collaboration with e-commerce platform Farfetch for made-to-order handbag designs.

All content from Kiddle encyclopedia articles (including the article images and facts) can be freely used under Attribution-ShareAlike license, unless stated otherwise. Cite this article:
Fendi Facts for Kids. Kiddle Encyclopedia.