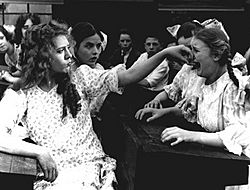 A female bully, portrayed in the 1917 silent film Rebecca of Sunnybrook Farm.

School bullying is a pattern of behavior during the ages when children and young people are in school. It is about an imbalance of social, physical or other power involving a person or group.

There are four basic types of bullying: verbal, physical, psychological, and cyber. Cyberbullying is becoming one of the most common types. While victims can experience bullying at any age, it is witnessed most by school-aged children.

Direct bullying is a relatively open attack on a victim that is physical and/or verbal in nature. Indirect bullying is more subtle and harder to detect, but involves one or more forms of relational aggression, including social isolation via intentional exclusion, spreading rumors to defame one's character or reputation, making faces or obscene gestures behind someone's back, and manipulating friendships or other relationships.

Pack bullying is bullying undertaken by a group.

Bullying apps and videos for kids

All content from Kiddle encyclopedia articles (including the article images and facts) can be freely used under Attribution-ShareAlike license, unless stated otherwise. Cite this article:
School bullying Facts for Kids. Kiddle Encyclopedia.