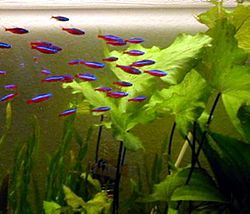 A shoal of cardinal tetras in an aquarium

The cardinal tetra (Paracheirodon axelrodi) is a freshwater fish.

The cardinal tetra will feed happily on flake foods and small pellets. They also eat live food such as bloodworms or brine shrimp.

All content from Kiddle encyclopedia articles (including the article images and facts) can be freely used under Attribution-ShareAlike license, unless stated otherwise. Cite this article:
Cardinal tetra Facts for Kids. Kiddle Encyclopedia.