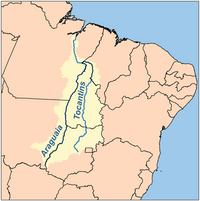 The Tocantins River is a river that flows through the northeastern part of Brazil. It rises in the district with a lot of mountains known as the Pireneus. These can be found to the west of the Federal District. Its western tributary, the Araguaia River, has headwaters very far south on the slopes of the Serra dos Caiapós.

All content from Kiddle encyclopedia articles (including the article images and facts) can be freely used under Attribution-ShareAlike license, unless stated otherwise. Cite this article:
Tocantins River Facts for Kids. Kiddle Encyclopedia.