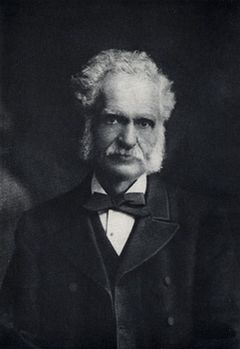 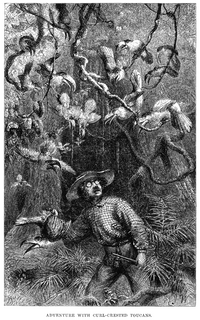 Bates in the Amazon

This naturalist and explorer gave the first scientific account of mimicry in animals. Batesian mimicry is named after him. He was most famous for his expedition to the Amazon River basin with Alfred Russel Wallace in 1848. He spent 11 years in the rain forest.

In 1847 Wallace and Bates discussed the idea of an expedition to the Amazon basin. The plan was to defray expenses by sending specimens back to London, where an agent would sell them for a commission. Also, for the travellers to "gather facts towards solving the problem of the origin of species", as Wallace put it in a letter to Bates.

The two friends, who were both by now experienced amateur entomologists, met in London to prepare themselves by viewing South American plants and animals in the main collections.

Bates and Wallace sailed from Liverpool in April 1848, arriving in Pará (now Belém) at the end of May. For the first year they settled in a villa near the city, collecting birds and insects. After that they agreed to collect independently.

Eventually, Bates' health deteriorated and he returned to England, sending his collection by three different ships. He didn't want to put all his insects into one boat. Bates wrote a famous book on his experiences: The naturalist on the river Amazons.

All content from Kiddle encyclopedia articles (including the article images and facts) can be freely used under Attribution-ShareAlike license, unless stated otherwise. Cite this article:
Henry Walter Bates Facts for Kids. Kiddle Encyclopedia.