Vestmannaeyjar (sometimes called the Westman Islands) is a town and archipelago off the south coast of Iceland.

The largest island, Heimaey, has a population of 4,135. The other islands are uninhabited.

The town was evacuated in 1973 because of the Eldfell eruption. The eruption destroyed one fifth of the town before the lava flow was stopped by putting 1.5 billion gallons (6.8 billion litres) of cold water on it. 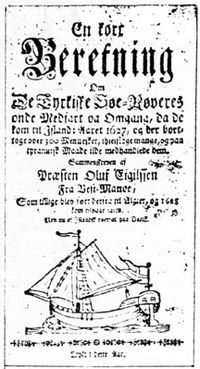 The islands are named after the Gaelic slaves who had been captured by the Norsemen. The Old Norse word, Vestmenn (meaning Westmen), was applied to the slaves and was retained in Icelandic.

After Ingólfr Arnarson first arrived in Iceland, his brother Hjörleifr Hróðmarsson was murdered by the Gaelic slaves. In response, he tracked the slaves down to the islands are murdered all of them, hence the name Vestmannaeyjar (the islands of the west men).

On 16 July 1627, the islands were captured by a group of North African pirates who stayed there until 19 July. They were under control of the Ottomans. The pirates captured 234 people from the islands and took them on a 27-day voyage to Algiers, where most of them spent their life under bondage. One of the prisoners, minister Ólafur Egilsson, returned in 1628 to the islands and wrote a book about his experience. In 1636, a ransom was paid for 34 of the captives, and most of them returned to Iceland. After this, a fort was built on the Helgafell volcano to keep watch for ships.

For centuries, the people who lived on the islands survived from fishing and eating birds and their eggs. At the end of the 19th century, the lifestyle of the islanders greatly improved. In 1904, the first motorised boat was purchased, and more followed soon afterwards. By 1930, the population had risen from 600 in 1900 to 3,470. The islands have since been known for being a great fishing and sea processing developer.

In 2000, the Norwegian government gifted Iceland with the Heimaey stave church. This was to celebrate the conversion of Iceland to Christianity a thousand years earlier.

The Vestmannaeyjar archipelago is geologically young. They have been formed by eruptions over the past 10,000–12,000 years. The volcanic system is made up of 70–80 volcanoes.

There are a total of 15 islands, and about 30 rock stacks and skerries. All islands were formed from underwater eruptions and are made up of palagonite tuff and lava. The oldest island is Heimaey ("Home Island"). Basalt columns can be seen in many places, along with coves caused by soft rock erosion.

The Eldfell eruption caused Heimaey to grow by about 2.1 square kilometres (0.81 sq mi). The highest point in Vestmannaeyjar is at around 900 feet on the Heimaey island.

There is little snow in Vestmannaeyjar, but plenty of rain. Because of this, migrating birds are often seen in spring and leave during autumn. All of Iceland's seabirds can be found in Vestmannaeyjar: the guillemot, gannet, kittiwake, Iceland gull, and puffin. The puffin is the Vestmannaeyjar emblem, and can be seen all around the island.

There are about 150 plant species on the island, along with 80 types of insects. The waters around the island have some of the North Atlantic's richest fishing grounds. The two main commercially used fish in Iceland, the cod and haddock, are found in great amounts near the island. Other types of fish near the islands include flatfish, herring, capelin, lobsters and ocean perch. Seals, small types of whales and other marine species are also present in large numbers around the islands.

The islands receive a lot of rain considering its latitude. Vestmannaeyjar has a tundra climate (closely bordering the subpolar oceanic climate) under the Köppen climate classification. There is a lot of wind on the islands. The highest wind speed recorded in Iceland (61 metres per second;140 mph) was recorded at the southern point of the Heimaey island. However, the island enjoys the highest annual temperature in Iceland.

All content from Kiddle encyclopedia articles (including the article images and facts) can be freely used under Attribution-ShareAlike license, unless stated otherwise. Cite this article:
Vestmannaeyjar Facts for Kids. Kiddle Encyclopedia.