Jaisalmer , nicknamed "The Golden city", is a city in the Indian state of Rajasthan, located 575 kilometres (357 mi) west of the state capital Jaipur. Once known as Jaisalmer state it is a World Heritage Site. The town stands on a ridge of yellowish sandstone, and is crowned by the ancient Jaisalmer Fort. This fort contains a royal palace and several ornate Jain temples. Many of the houses and temples of both the fort, and of the town below, are built of finely sculptured sandstone. The town lies in the heart of the Thar Desert (the Great Indian Desert) and has a total population, including the residents of the fort, of about 78,000.

Jaisalmer is named after the maharawal, Jaisal Singh, a Rajput king who founded the city in 1156 AD. "Jaisalmer" means "the Hill Fort of Jaisal", it is sometimes called the "Golden City of India" because the yellow sandstone used throughout the architecture of both the fort and the town below, tinges both with a certain golden-yellow light.

Tourism is a major industry in Jaisalmer. There are many attractions to be seen, some being; 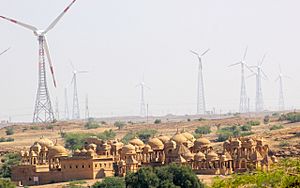 Jaisalmer boasts some of the oldest libraries of India which contain rarest of the manuscripts and artefacts of Jain tradition. There are many pilgrimage centres around Jaisalmer.

Musicians and dancers are also a major cultural export from Jaisalmer to the rest of the world. Merasi musicians have played the world over. Jaisalmer is also known for its leather messenger bags, made from wild camels native to the area.

Desert Festival of Jaisalmer is the most awaited and famous cultural and colourful events, where Camel races and turban tying competitions are organized. It is held in the month of February every year in Rajasthan. The desert festival in Jaisalmer has showcased Rajasthani folk songs and dance and is visited by foreign tourists every year. The rich culture of the region is on display during this three-day long festival. This is the best time to visit Jaisalmer to witness performing arts like Kalbelia dances and folk songs and music. The Gair and Fire dancers are major attractions of the Jaisalmer desert festival celebrations.

All content from Kiddle encyclopedia articles (including the article images and facts) can be freely used under Attribution-ShareAlike license, unless stated otherwise. Cite this article:
Jaisalmer Facts for Kids. Kiddle Encyclopedia.