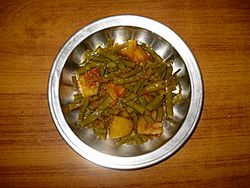 Guar is a crop which is mostly grown in Pakistan. This crop is planted in July or August and harvested at the end of November. Guar is widely used in oil exploring fields and also in the cosmetics industry. There are four major countries in the world which produce guar: Sudan, India, Pakistan, and the United States.

All content from Kiddle encyclopedia articles (including the article images and facts) can be freely used under Attribution-ShareAlike license, unless stated otherwise. Cite this article:
Guar Facts for Kids. Kiddle Encyclopedia.