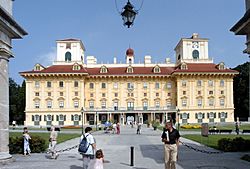 Schloss Esterhazy is a palace in Eisenstadt, Austria.

It was built in the end of 13th century and belonged to Esterházy family.

The architectural history of the building involves a transition from an actual medieval castle, built for defense, to a palace meant for comfort and ostentatious display. The moats were removed in the early 19th century, and the architectural style was modified at various points to fit the taste of the times.

1364 The palace comes into the possession of the powerful Kanizsai family and consequently experiences a substantial development.

1371 King Louis acquires and develops the castle into a "medieval city castle" included in the northwest perimeter of the city of Eisenstadt.

1622 Ownership falls under the possession of the Esterházy family.

After the death of Count Ladislaus Esterházy in the battle of Vezekény in 1652, his younger brother Paul inherited the palace. The additions he made took nearly ten years to complete, and gave it the facade we see today. The rich stucco decoration was made by the Italian master Andrea Bertinalli.

There were few changes made during the high and late baroque periods. In the 18th century, the interior design and staircases were about all that changed. Most areas were equipped with furnaces and stucco ceilings. The only large construction work in the palace was the renewal of the two main staircases, which are presently the same.

The palace was one of the summer residences of the Esterházy family during the time of Joseph Haydn. 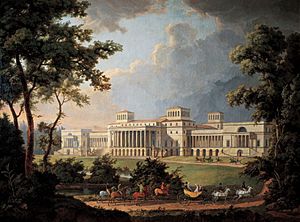 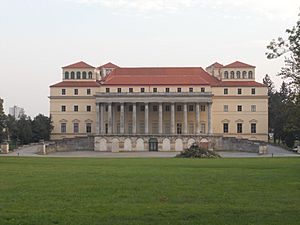 Modern view of the rear of the palace -- in the end only the central portions of the classical redesign could be completed.

Prince Anton Esterházy built considerably, despite his being in power for only a short time (1790–94). Nikolaus II, the spendthrift son of Anton, launched a program to convert the residence into Classical style. Nikolaus succeeded in acquiring the services of one of the best known French architects of the classical revolution, Charles Moreau. Moreau wanted to keep only the core of the building in baroque style, and extensively renovate and add to the palace in classical style. The eastern side would accommodate the theatre and the opera, the western the Esterházy picture gallery. Between the two north towers the garden hall would be the forerunner to today's magnificent Haydnsaal. As an entrance to this hall, Moreau built a powerful entrance with spacious ramps on each end, resting on twenty Corinthian columns. Moreau also established a set of the different "high society" rooms; many with different styles.

But Prince Nikolaus's funds, ample as they were, did not suffice to complete these renovations; his expenses (maintaining numerous mistresses, paying for the art, supporting the Austrian side in the Napoleonic wars, reviving Haydn's musical establishment), coupled with the severe inflation and economic decline that war brought to Austria, meant that the renovations could never be completed, even by subsequent generations of princes. The grand entrance Nikolaus and Moreau planned is orphaned (see image to right), as the main entrance to the palace remains to this day in its original location on the opposite end of the building, facing the town.

In the late 19th century renovation work finally began. Few changes were made in the early part of the 20th century. In 1945, at the end of the Second World War, a major change was made in the purpose of the palace: it accommodated the office of the Burgenland state government and later the national court for ten years. In 1969 the Burgenland state government took over major parts of the building through lease.

Currently, the palace is under the ownership of the Esterházy Foundation. As one of the most substantial palaces in Austria, it is a major tourist attraction. Visitors may view a number of rooms as well as the furnishings and artwork, and may also tour the extensive grounds behind the palace. There is a wine museum and gift shop. Guided tours are offered, as well as concerts in the Haydnsaal. In 2019, the palace was used as the set for alternative singer Melanie Martinez's musical-film K-12 (album). 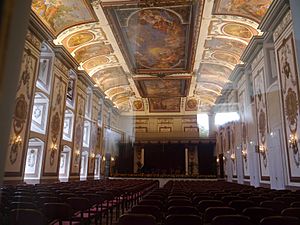 The Haydnsaal, originally the large multi-purpose festival and banquet room, is a piece of artwork in itself in the Schloss Esterházy. With its size and ornate splendor, it reflects the political, economic and cultural dominance of the Esterházy family.

Today it ranks among the most beautiful and acoustically perfect concert halls of the world. Its name goes back to the famous composer Joseph Haydn, who worked for nearly forty years in the service of the Esterházy family. Many of his works were composed and premiered in Eisenstadt and the Schloss Esterházy.

The Haydnsaal was established under Paul Esterházy the first, in the course of the baroque building phase (1663–72). It was part of plans made by Carlo Martino Carlone, originating from Italy, which covered the largest part of the northern wing. It extends over three stories, whereby the side facing to the courtyard three windows are poised one above the other.

At the beginning of the classical change period, 1803, the Garden Room extended along the north side in front of the Haydnsaal. The windows previously installed there were bricked up. Friedrich Rhode, the court painter, decorated the remaining recesses with Biedermeier-style festoons. Masonry wall openings were provided at both the east and west ends, sealed off by two large alcoves, and served as access ways to the planned opera/theatre wing and gallery section.

The unique frescoes of the hall originate from that 17th century and are attributed to the painter Carpoforo Tencalla. The splendid murals and ceiling paintings represent scenes from "Metamorphoses" by the Roman poet and philosopher Apuleius (200 AD). The three centre segments and six rectangular volute panels portray scenes from the satyric novel "Cupid and Psyche". The centre panels depict the marriage of Cupid and Psyche in the presence of the Olympic Gods, while scenes taken from the lives of the two are captured in the rectangular panels.

Depicted in the cruciform volute panels are scenes taken from the myth surrounding the "Golden Apples of Hesperides". Interspaced between the ceiling frescoes are the family armorial bearings of the Esterházys (earls and alliances). Worked into the volute medallions featuring grisaille techniques are allegorical female characters symbolising the "Countries of St. Stephen's Crown".

The medallions embellishing the walls (court painter Friedrich Rohde, 1793) portray busts of Hungarian monarchs ranging from Stephen I to Emperor Leopold I. The 18 sandstone busts seen on the main façade form part of the same series.

All content from Kiddle encyclopedia articles (including the article images and facts) can be freely used under Attribution-ShareAlike license, unless stated otherwise. Cite this article:
Schloss Esterhazy Facts for Kids. Kiddle Encyclopedia.