Middle High German is the form of the German language spoken and written in the High Middle Ages. It is usually placed in the period between 1050 and 1350. It developed from Old High German and then developed into Early New High German. 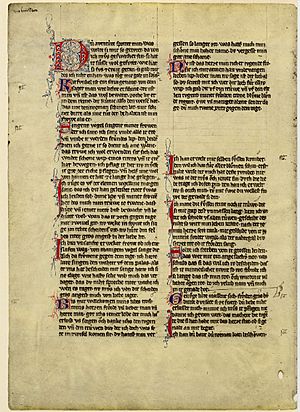 A page of the Manesse Codex, written in Middle High German

All content from Kiddle encyclopedia articles (including the article images and facts) can be freely used under Attribution-ShareAlike license, unless stated otherwise. Cite this article:
Middle High German Facts for Kids. Kiddle Encyclopedia.