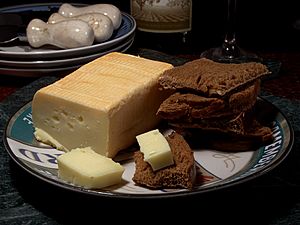 Limburger cheese is a cheese made from cows' milk. Its name comes from the Duchy of Limburg, which is divided between Holland, Belgium and Germany today. Limburger cheese is known for its strong smell, which is caused by the bacterium that lives in its rind. Since about the mid nineteenth century, most Limburger is produced in Germany.

There are many jokes about Limburger and its odor. In 2006 a study showing that the malaria mosquito (Anopheles gambiae) is attracted equally to the smell of Limburger and to the smell of human feet earned the Ig Nobel Prize in the area of biology. This Cheese has now been placed in strategic locations in Africa to fight against malaria, which is spread by mosquitoes.

In its first month, the cheese is firmer and crumblier, similar to the texture of feta cheese. After about six weeks, the cheese becomes softer along the edges but is still firm on the inside and can be described as salty and chalky. After two months of its life, it is mostly creamy and much smoother. Once it reaches three months, the cheese produces its notorious smell because of the bacterium used to ferment Limburger cheese and many other smear-ripened cheeses. This is Brevibacterium linens, the same one found on human skin that is partially responsible for body odor and particularly foot odor. 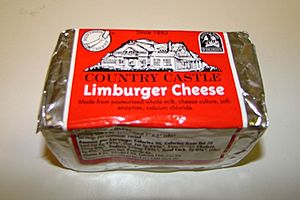 A half-pound package of Limburger.

One of the most traditional ways of eating limburger is the limburger sandwich. After three months, when the cheese has ripened, it becomes spreadable. The cheese is often spread thick (more than 0.5 cm or 0.2 inch) on firm-textured 100% rye bread, with a large, thick slice of onion, and is typically served with strong black coffee or lager beer. Alternatively, chunks or slices of the cheese up to 1.5 cm (0.6 inch) thick can be cut off the block and placed in the sandwich. This sandwich remains very popular among the descendants of German immigrants in the Midwestern United States, in places like Wisconsin and Ohio. However, it is markedly less popular among the descendants born after about 1960, mainly because of the permeating smell and the inconvenience of going to specialty cheese and sausage shops to obtain it. In Wisconsin, the Limburger sandwich can be found on menus at certain restaurants, accompanied by brown mustard.

All content from Kiddle encyclopedia articles (including the article images and facts) can be freely used under Attribution-ShareAlike license, unless stated otherwise. Cite this article:
Limburger cheese Facts for Kids. Kiddle Encyclopedia.