Born Petrus Josephus Wilhelmus Debije in Maastricht, Netherlands, Debye enrolled in the Aachen University of Technology in 1901. In 1905, he completed his first degree in electrical engineering. He published his first paper, a mathematically elegant solution of a problem involving eddy currents, in 1907. At Aachen, he studied under the theoretical physicist Arnold Sommerfeld, who later claimed that his most important discovery was Peter Debye.

In 1906, Sommerfeld received an appointment at Munich, Bavaria, and took Debye with him as his assistant. Debye got his Ph.D. with a dissertation on radiation pressure in 1908. In 1910, he derived the Planck radiation formula using a method which Max Planck agreed was simpler than his own.

In 1911, when Albert Einstein took an appointment as a professor at Prague, Bohemia, Debye took his old professorship at the University of Zurich, Switzerland. This was followed by moves to Utrecht in 1912, to Göttingen in 1913, to ETH Zurich in 1920, to University of Leipzig in 1927, and in 1934 to Berlin, where, succeeding Einstein, he became director of the Kaiser Wilhelm Institute for Physics (now named the Max-Planck-Institut) whose facilities were built only during Debye's era. He was awarded the Lorentz Medal in 1935. From 1937 to 1939 he was the president of the Deutsche Physikalische Gesellschaft.

In May 1914 he became member of the Royal Netherlands Academy of Arts and Sciences and in December of the same year he became foreign member.

Debye was described as a martinet when it came to scientific principles, yet was always approachable and made time for his students. His personal philosophy emphasized a fulfillment of purpose and enjoyment in one's work. Debye was an avid trout fisherman and gardener, collector of cacti, and was "always known to enjoy a nice cigar".

While in Berlin as an assistant to Arnold Sommerfeld, Debye became acquainted with Mathilde Alberer. Mathidle was the daughter of the proprietor of the boarding house in which Debye was staying at. Malthide would soon change her citizenship and in 1913, Debye married Mathilde Alberer. Debye would enjoy working in his rose garden with Mathilde Albere late into his years. They had a son, Peter P. Debye (1916-2012), and a daughter, Mathilde Maria (born 1921). Peter became a physicist and collaborated with Debye in some of his researches, and had a son who was also a chemist.

His first major scientific contribution was the application of the concept of dipole moment to the charge distribution in asymmetric molecules in 1912, developing equations relating dipole moments to temperature and dielectric constant. In consequence, the units of molecular dipole moments are termed debyes in his honor. Also in 1912, he extended Albert Einstein's theory of specific heat to lower temperatures by including contributions from low-frequency phonons. See Debye model.

In 1913, he extended Niels Bohr's theory of atomic structure, introducing elliptical orbits, a concept also introduced by Arnold Sommerfeld. In 1914–1915, Debye calculated the effect of temperature on X-ray diffraction patterns of crystalline solids with Paul Scherrer (the "Debye–Waller factor"). In 1923, together with his assistant Erich Hückel, he developed an improvement of Svante Arrhenius' theory of electrical conductivity in electrolyte solutions. Although an improvement was made to the Debye–Hückel equation in 1926 by Lars Onsager, the theory is still regarded as a major forward step in our understanding of electrolytic solutions. Also in 1923, Debye developed a theory to explain the Compton effect, the shifting of the frequency of X-rays when they interact with electrons. 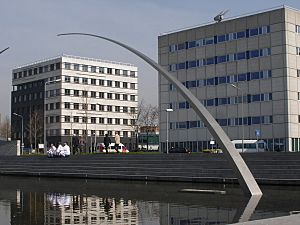 From 1934 to 1939 Debye was director of the physics section of the prestigious Kaiser Wilhelm Institute in Berlin. From 1936 onwards he was also professor of Theoretical Physics at the Frederick William University of Berlin. These positions were held during the years that Adolf Hitler ruled Nazi Germany and, from 1938 onward, Austria.

In 1939 Debye traveled to the United States to deliver the Baker Lectures at Cornell University in Ithaca, New York. After leaving Germany in early 1940, Debye became a professor at Cornell, chaired the chemistry department for 10 years, and became a member of Alpha Chi Sigma. In 1946 he became an American citizen. Unlike the European phase of his life, where he moved from city to city every few years, in the United States Debye remained at Cornell for the remainder of his career. He retired in 1952, but continued research until his death.

Much of Debye's work at Cornell concerned the use of light-scattering techniques (derived from his X-ray scattering work of years earlier) to determine the size and molecular weight of polymer molecules. This started as a result of his research during World War II on synthetic rubber, but was extended to proteins and other macromolecules.

In April 1966, Debye suffered a heart attack, and in November of that year a second one proved fatal. He is buried in the Pleasant Grove Cemetery (Ithaca, New York, USA).

All content from Kiddle encyclopedia articles (including the article images and facts) can be freely used under Attribution-ShareAlike license, unless stated otherwise. Cite this article:
Peter Debye Facts for Kids. Kiddle Encyclopedia.