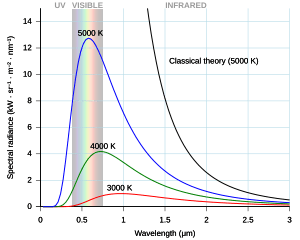 Planck's law describes the spectral density of electromagnetic radiation emitted by a black body in thermal equilibrium at a given temperature T. The law is named after Max Planck, who proposed it in 1900. It is a pioneering result of modern physics and quantum theory.

All content from Kiddle encyclopedia articles (including the article images and facts) can be freely used under Attribution-ShareAlike license, unless stated otherwise. Cite this article:
Planck's law Facts for Kids. Kiddle Encyclopedia.