Campaigns of 1794 in the French Revolutionary Wars facts for kids

In the Alps, there was little change. The French invasion of Piedmont failed. On the Spanish border, the French under General Dugommier came from their defensive positions at Bayonne and Perpignan, to move the Spanish out of Roussillon. They invaded Catalonia. Dugommier was killed in the Battle of the Black Mountain in November. 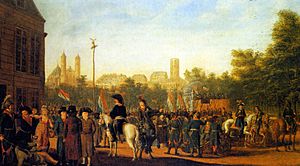 French forces raise the cap of liberty in the Neumarkt, Cologne, 1794

On the northern front in the Flanders Campaign, the Austrians and French both prepared in Belgium. The Austrians went towards Mons and Maubeuge. The French got ready on multiple fronts. There were two armies in Flanders under Pichegru and Moreau. Jourdan attacked from the German border. The French had damage in the Kortrijk, Tourcoing and Fleurus in June. The French armies drove the Austrians, British, and Dutch beyond the Rhine. Then they moved into Belgium, the Rhineland, and southern Holland.

On the middle Rhine front in July General Michaud's Army of the Rhine tried two offensives in July. This sector of the front was largely quiet over the course of the year.

At sea, the French Atlantic Fleet was able to hold off a British attempt to stop an important cereal convoy from the United States. In the Caribbean, the British fleet landed in Martinique in February, and in

By the end of the year French armies had won victories on all fronts.

All content from Kiddle encyclopedia articles (including the article images and facts) can be freely used under Attribution-ShareAlike license, unless stated otherwise. Cite this article:
Campaigns of 1794 in the French Revolutionary Wars Facts for Kids. Kiddle Encyclopedia.