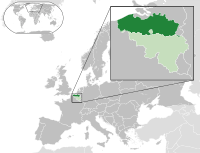 Flemish is the language of Flanders: in dark green, the northern part of Belgium

Flemish is a language. It is a type of Dutch which is spoken by people in Belgium. It is the same as Dutch, but there are some typical words added. Dutch became the official language of the northern part of Belgium in 1938. The biggest difference from Dutch is the pronunciation.

All content from Kiddle encyclopedia articles (including the article images and facts) can be freely used under Attribution-ShareAlike license, unless stated otherwise. Cite this article:
Flemish language Facts for Kids. Kiddle Encyclopedia.