Françoise Marie de Bourbon, Légitimée de France, Granddaughter of France by marriage (4 May 1677 – 1 February 1749) was the youngest legitimised daughter (fille légitimée de France) of Louis XIV of France and his mistress, Madame de Montespan. She was famed for her arrogance and belief that she was above most other people.

Originally known as the second Mademoiselle de Blois, that style eventually gave way to the name Françoise Marie de Blois. She married her first cousin Philippe d'Orléans in 18 February 1692 at the age of fourteen and later bore eight children, four of which would have further children.

Proud, lazy and attractive, she successfully intrigued to have her daughters marry well to the Prince of Conti, Duke of Berry, Duke of Modena and King of Spain, mostly to spite her sister Louise Françoise de Bourbon, the Duchess of Bourbon. However, she welded little political influence considering her proximity to the political circle of the era. She was involved in the Cellamare Conspiracy in 1718 which was supposed to overthrow her own husband Philippe d'Orléans as Regent of the Kingdom and replace him with her favourite brother the Duke of Maine. The marquis d'Argenson said she was very like her mother, Madame de Montespan, but also had Louis XIV's orderly mind with his failings of injustice and harshness.

Among her male line descendents are Philippe Egalité, Louis-Philippe I, King of the French, and Prince Henri, Count of Paris, the present Orléanist pretender to the French throne. She is also an ancestor of Juan Carlos I of Spain, Philippe, King of the Belgians, Henri, Grand Duke of Luxembourg and Vittorio Emanuele, Prince of Naples, the pretender to the Italian throne. 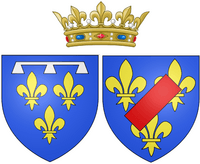 All content from Kiddle encyclopedia articles (including the article images and facts) can be freely used under Attribution-ShareAlike license, unless stated otherwise. Cite this article:
Françoise Marie de Bourbon Facts for Kids. Kiddle Encyclopedia.