Françoise-Athénaïs de Rochechouart de Mortemart, Marquise of Montespan (5 October 1640 – 27 May 1707), better known as Madame de Montespan, was the most celebrated partner of King Louis XIV of France, by whom she had seven children.

Born into one of the oldest noble families of France, the House of Rochechouart, Madame de Montespan was called by some the "true Queen of France"' during her relationship with Louis XIV, due to the pervasiveness of her influence at court during that time. Her so-called "reign" lasted from around 1667, when she first danced with Louis XIV at a ball hosted by the king's younger brother, Philippe I, Duke of Orléans, at the Louvre Palace.

She is an ancestress of several royal houses in Europe, including those of Spain, Italy, Bulgaria, Portugal, Belgium, and Luxembourg. 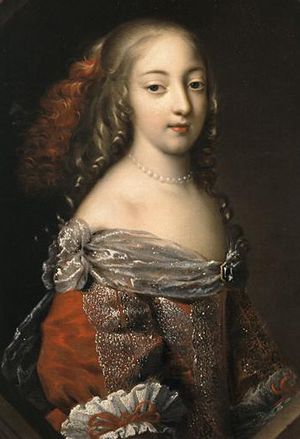 Françoise-Athénaïs was born on October 1640 and baptised on 5 October 1640 at the Château of Lussac-les-Châteaux in today's Vienne department, in the Poitou-Charentes region in France. Françoise (as a précieuse, she later adopted the name "Athénaïs"), or more formally, Mademoiselle de Tonnay-Charente, possessed the blood of two of the oldest noble families of France through her parents, Gabriel de Rochechouart, Duke of Mortemart, Prince of Tonnay-Charente, and Diane de Grandseigne, a lady-in-waiting to Anne of Austria, Queen consort of France.

From her father, she inherited the famous Mortemart esprit ("wit"). As a young girl, she often travelled with her mother between the family estates and the court at the Louvre in Paris. At the age of 12, she began her formal education at the Convent of St Mary at Saintes, where her sister Gabrielle had started hers almost a decade earlier. She was very religious and took Communion once a week, a practice that she would continue as a young woman. Her siblings were:

At the age of 20, Françoise-Athénaïs became a maid-of-honour to the king's sister-in-law, Princess Henrietta Anne of England, who was known at court by the traditional honorific of Madame. Later, because of the relationship between her mother and the queen dowager, Anne of Austria, Françoise-Athénaïs was appointed to be a lady-in-waiting to the king's wife, Maria Theresa of Spain.

On 28 January 1663, Françoise-Athénaïs married Louis Henri de Pardaillan de Gondrin, Marquis of Montespan, who was one year her junior. Madame de La Fayette says in her Histoire de madame Henriette d'Angleterre that Françoise-Athénaïs was in love with another young man, Louis de La Trémoille, who was the elder son and heir to the Duc de Noirmoutier (one of the leaders of the Fronde). However, La Trémoille had to flee to Spain after a disastrous duel, and Françoise-Athénaïs was betrothed to Montespan. The wedding ceremony took place in a chapel at the Église Saint-Eustache in Paris. Françoise later recounted that as she had neglected to bring along the proper kneeling cushions for the ceremony, the couple had to kneel on dog cushions. She soon became pregnant with her first child, Christine. Two weeks after her daughter's birth she danced in a Court Ballet, and less than a year later her second child was born. The Montespan children were:

The couple lived in a small house close to the Louvre, which allowed Madame de Montespan to attend court and carry out her duties there as a lady-in-waiting to the Duchess of Orléans. She quickly established herself as the "reigning beauty of the court". Beauty, however, was only one of Madame de Montespan's many charms. She was a cultured and amusing conversationalist, who won the admiration of such literary figures as letter-writer Madame de Sévigné and diarist Saint-Simon. In addition, she kept abreast of political events. This had the effect of making her even more appealing to men of intellect and power. She was courted by a number of suitors including le comte de Frontenac and Marquis de La Fare.

Rise as partner to Louis XIV 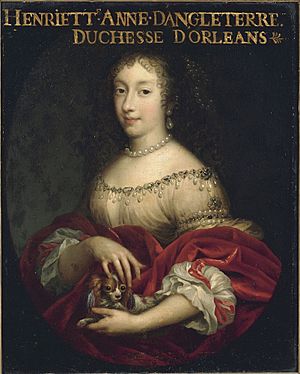 Henrietta Anne of England, to whom Madame de Montespan was a lady-in-waiting.

Madame de Montespan astounded the court by openly resenting the position of Queen Maria Theresa of Spain. The daughter of King Philip IV of Spain and Elisabeth de France, the Queen's Spanish title, before her marriage, was Infanta María Teresa de Austria. In France, she was known as Marie-Thérèse d'Autriche. A scandal arose when the Duchess of Montausier, governess of the royal children and lady-in-waiting to the Queen, was accused of acting as a go-between in order to secure the governorship of the Dauphin for her husband, the Duke of Montausier.

By 1666, Madame de Montespan was trying to take the place of Louis XIV's current partner, Louise de La Vallière. Using her wit and charm, she sought to ingratiate herself with the king. She also became close to the Dauphin, whose affection for her never wavered. Even though Louise de La Vallière knew that Montespan was trying to conquer the King's heart, and reportedly laughed at her miserable efforts, she definitely underestimated her new rival. Montespan cleverly cultivated friendships with both Louise and Queen Maria Teresa, and when both ladies were pregnant, Madame de Montespan was asked to help them entertain the King during private dinners. Soon they regretted their decision, for Montespan now cultivated an intimate relationship with the King.

She also became friends at court with another lady-in-waiting to the queen, Louise Boyer, the wife of Anne, Duke of Noailles. Montespan's youngest son, the Count of Toulouse, would later marry one of Boyer's granddaughters. 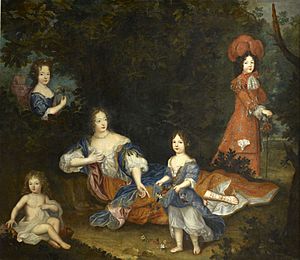 The first of Madame de Montespan's seven children with the king was born in 1669. The newborn child, a girl, is thought to have been named Louise-Françoise. The upbringing of this first child (and subsequent children) was entrusted to one of Madame de Montespan's friends, Madame Scarron (the future marquise de Maintenon). A son, Louis-Auguste, was born in 1670. When the third child, Louis-César, was born in 1672, a house was purchased for Scarron and the children on the Rue Vaugirard.

In 1673, the couple's three living children were legitimated by Louis XIV and given the royal surname of de Bourbon. The eldest, a son, Louis-Auguste de Bourbon, became the duc du Maine; the second child, a son, Louis-César de Bourbon, became the comte de Vexin; and the third, a daughter, Louise-Françoise de Bourbon, became Mademoiselle de Nantes and in 1685 married the son of the head of the House of Condé, a cadet branch of the reigning House of Bourbon. As Madame de Montespan spent the majority of her time immersed in the social whirl of the court, the three had little contact with their busy mother and spent most of their childhood with their governess, Madame Scarron.

In 1674, an official separation with her husband was declared by the Procureur général Achille de Harlay, assisted by six judges at the Châtelet.

After a short separation, the King and Madame de Montespan resumed their relationship, resulting in the birth of two more children, Françoise Marie de Bourbon, Mademoiselle de Blois, in 1677, and Louis-Alexandre de Bourbon, comte de Toulouse, in 1678. Both were to be legitimised in 1681. 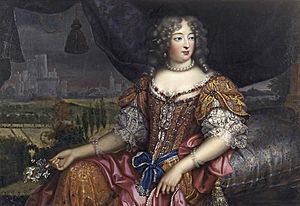 Athénaïs was considered "astonishingly beautiful" by the standards of her time. She had large, blue eyes, long, thick and corn-coloured hair that fell in curls about her shoulders. She was droll, amusing and used her considerable wit to mock others.

She also had an extravagant and demanding nature and possessed enough charm to get what she wanted. She was expensive and glorious, like the Palace of Versailles itself. Her apartments were filled with pet animals and thousands of flowers; she had a private gallery, and costly jewels were showered upon her. She was highly discriminating as regards to the quality of the gems; returning them if they did not meet her exacting standards. She was given the nickname Quanto ("How much", in Italian). Her love for food and her numerous pregnancies caused her to gain weight in her late thirties. 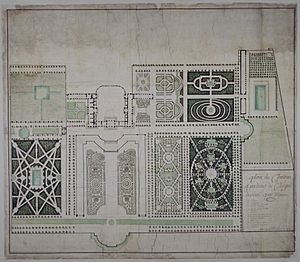 A plan of the Château de Clagny and its gardens

The Château de Clagny in Versailles was built between 1674 and 1680 from the drawings of Jules Hardouin-Mansart, Premier architecte du Roi, (First architect of the King), on land bought by Louis XIV in 1665. Madame de Sévigné wrote that its construction employed 1,200 workers and the cost was no less than 2 million "livres". The royal gardener André Le Nôtre created the gardens, which looked west toward the much larger palace of Versailles, of which Clagny was a smaller version. The château de Clagny was also famed for its gallery. In 1685, Louis XIV gave the magnificent palace to Madame de Montespan. At her death, Clagny was inherited by her oldest son, the duc du Maine, who, in turn, passed it on to his son, Louis-Auguste de Bourbon, prince de Dombes. The château reverted to the French crown in 1766 and was demolished in 1769. 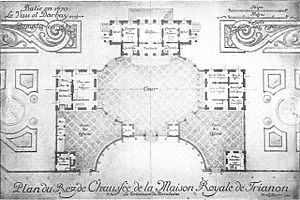 A plan of the Trianon de Porcelaine; built for Madame de Montespan by Louis XIV. It was there that she sought to escape from court life

Louis XIV also had a pleasure pavilion, called the Trianon de Porcelaine built for Madame de Montespan, and surrounded by gardens, on the site of the former hamlet of Trianon which he had purchased near the Palace of Versailles. It was meant as a hideaway for the couple. Because of the fragility of the earthenware tiles used in its construction, the Trianon de porcelaine was demolished in 1687 and replaced by the Grand Trianon of pink marble (marbre rose des Pyrénées).

All content from Kiddle encyclopedia articles (including the article images and facts) can be freely used under Attribution-ShareAlike license, unless stated otherwise. Cite this article:
Françoise-Athénaïs de Rochechouart, Marquise de Montespan Facts for Kids. Kiddle Encyclopedia.