Louise Élisabeth d'Orléans (11 December 1709 – 16 June 1742) was the wife of Louis I of Spain. She was a daughter of Françoise Marie de Bourbon and Philippe, Duke of Orléans, Regent of France. She married Louis, then known as the Prince of Asturias on 20 January 1722. She had no children and became Queen of Spain in January 1724 before her husband died the same year of smallpox. She was sent back to France where she died alone and ignored in Paris in 1742. She is noted as one of the shortest reigning royal consorts in history. 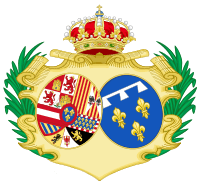 All content from Kiddle encyclopedia articles (including the article images and facts) can be freely used under Attribution-ShareAlike license, unless stated otherwise. Cite this article:
Louise Élisabeth d'Orléans Facts for Kids. Kiddle Encyclopedia.