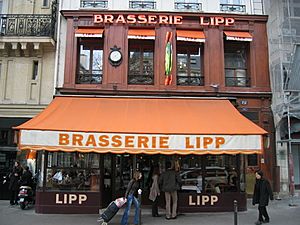 The front of Brasserie Lipp in Paris 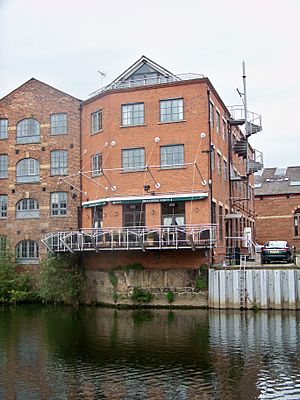 Brasserie, in France and nowadays in Britain, means a type of French restaurant. It has a relaxed setting, and serves single dishes and other meals. The word 'brasserie' is also French for "brewery". In the beginning, it was used for the place where the beer was brewed. Often these places served the beer they brewed, together with a meal.

A brasserie has professional service, printed menus, and (traditionally) white linen—unlike a bistro which may have none of these. Typically, a brasserie is open every day of the week and serves the same menu all day.

In 1901 Chambers's Twentieth Century Dictionary of the English Language defined 'brasserie' as "in France, any beer-garden or saloon". In 2000 The New Penguin English Dictionary had this definition of 'brasserie': "a small informal French-style restaurant".

All content from Kiddle encyclopedia articles (including the article images and facts) can be freely used under Attribution-ShareAlike license, unless stated otherwise. Cite this article:
Brasserie Facts for Kids. Kiddle Encyclopedia.