Luc Paul Maurice Besson (French: [lyk bɛsɔ̃]; born 18 March 1959) is a French film director, screenwriter and producer. He directed or produced the films Subway (1985), The Big Blue (1988), and La Femme Nikita (1990). Besson is associated with the Cinéma du look film movement. He has been nominated for a César Award for Best Director and Best Picture for his films Léon: The Professional (1994) and the English-language The Messenger: The Story of Joan of Arc (1999). He won Best Director and Best French Director for his sci-fi action film The Fifth Element (1997). He wrote and directed the 2014 sci-fi action film Lucy and the 2017 space opera film Valerian and the City of a Thousand Planets.

Near the beginning of his career, in 1980 he founded his own production company, Les Films du Loup, later renamed as Les Films du Dauphin. These were superseded in 2000 when he co-founded EuropaCorp with his longtime collaborator Pierre-Ange Le Pogam [fr]. As writer, director, or producer, Besson has been involved in the creation of more than 50 films.

Besson was born in Paris, to parents who both worked as Club Med scuba-diving instructors. Influenced by this milieu, as a child, Besson planned to become a marine biologist. He spent much of his youth traveling with his parents to tourist resorts in Italy, Yugoslavia, and Greece. The family returned to France when Besson was 10. His parents divorced, and both of them remarried.

"Here there is two families, and I am the only bad souvenir of something that doesn't work," he said in the International Herald Tribune. "And if I disappear, then everything is perfect. The rage to exist comes from here. I have to do something! Otherwise I am going to die."

At the age of 17, Besson had a diving accident that left him unable to dive.

"I was 17 and I wondered what I was going to do. ... So I took a piece of paper and on the left I put everything I could do, or had skills for, and all the things I couldn't do. The first line was shorter and I could see that I loved writing, I loved images, I was taking a lot of pictures. So I thought maybe movies would be good. But I thought that to really know I should go to a set. And a friend of mine knew a guy whose brother was a third assistant on a short film. It's true," he said in a 2000 interview with The Guardian. "So, I said: 'OK, let's go on the set.' So I went on the set...The day after I went back to see my mum and told her that I was going to make films and stop school and 'bye. And I did it! Very soon after I made a short film and it was very, very bad. I wanted to prove that I could do something, so I made a short film. That was in fact my main concern, to be able to show that I could do one."

Besson reportedly worked on the first drafts of Le Grand Bleu while still in his teens. Out of boredom, he started writing stories, including the background to what he later developed as The Fifth Element (1997), one of his most popular movies. The film is inspired by the French comic books which Besson read as a teenager. Besson directed and co-wrote the screenplay of this science fiction thriller with American screenwriter Robert Mark Kamen.

At 18, Besson returned to his birthplace of Paris. There he took odd jobs in film to get a feel for the industry. He worked as an assistant to directors including Claude Faraldo and Patrick Grandperret. Besson directed three short films, a commissioned documentary, and several commercials. After this, he moved to the United States for three years, but returned to Paris, where he formed his own production company. He first named it Les Films du Loup, but changed it to Les Films du Dauphin.

In the early 1980s, Besson met Éric Serra and asked him to compose the score for his first short film, L'Avant dernier. He later used Serra as a composer for other films of his. Since the late 20th century, Besson has written and produced numerous action movies, including the Taxi series (1998–2007), the Transporter series (2002–2008; another collaboration with Robert Mark Kamen), and the Jet Li films Kiss of the Dragon and Unleashed. His English-language films Taken, Taken 2, and Taken 3, all co-written with Kamen and starring Liam Neeson, have been major successes, with Taken 2 becoming the largest-grossing export French film. Besson produced the promotional movie for the Paris 2012 Olympic bid. 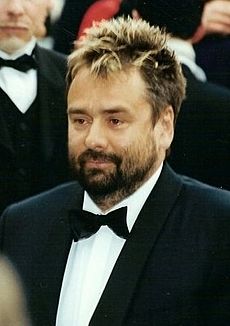 Besson at the 2000 Cannes Film Festival

Critics such as Raphaël Bassan and Guy Austin cite Besson as a pivotal figure in the Cinéma du look movement, a specific, highly visual style produced from the 1980s into the early 1990s. Subway (1985), The Big Blue (1988) and La Femme Nikita (1990) are all considered to be of this stylistic school. The term was coined by critic Raphaël Bassan in a 1989 essay in La Revue du Cinema n° 449. A partisan of the experimental cinema and friend of the New Wave ("nouvelle vague") directors, Bassan grouped Besson with Jean-Jacques Beineix and Leos Carax as three directors who shared the style of "le look." These directors were later described critically as favouring style over substance, and spectacle over narrative.

Besson, along with most of the filmmakers so categorised, was uncomfortable with the label. He contrasted their work with France's New Wave. "Jean-Luc Godard and François Truffaut were rebelling against existing cultural values and used cinema as a means of expression simply because it was the most avant-garde medium at the time," said Besson in a 1985 interview in The New York Times. "Today, the revolution is occurring entirely within the industry and is led by people who want to change the look of movies by making them better, more convincing and pleasurable to watch.

"Because it's becoming increasingly difficult to break into this field, we have developed a psychological armor and are ready to do anything in order to work," he added. "I think our ardor alone is going to shake the pillars of the moviemaking establishment."

Many of Besson's films have achieved popular, if not critical, success. One such release was Le Grand Bleu.

"When the film had its premiere on opening night at the 1988 Cannes Film Festival, it was mercilessly drubbed, but no matter; it was a smash," observed the International Herald Tribune in a 2007 profile of Besson. "Embraced by young people who kept returning to see it again, the movie sold 10 million tickets and quickly became what the French call a 'film générationnel,' a defining moment in the culture."

Besson has been described as "the most Hollywood of French filmmakers."

American film critic Armond White has praised Besson, whom he ranks as one of the best film producers, for refining and revolutionizing action film. He wrote that Besson dramatizes the struggle of his characters "as a conscientious resistance to human degradation".

Besson has been married four times; first, in 1986, to actress Anne Parillaud. Besson and Parillaud had a daughter, Juliette, born in 1987. Parillaud starred in Besson's La Femme Nikita (1990). The couple divorced in 1991.

Besson's second wife was actress and director Maïwenn Le Besco, whom he started dating when he was 31 and she was 15. They married in late 1992 when Le Besco, 16, was pregnant with their daughter Shanna, who was born on 3 January 1993. Le Besco later claimed that their relationship inspired Besson's film Léon (1994), where the plot involved the emotional relationship between an adult man and a 12-year-old girl. Their marriage ended in 1997, after Besson became involved with actress Milla Jovovich during the filming of The Fifth Element (1997).

On 28 August 2004, at the age of 45, Besson married film producer Virginie Silla. The couple have three children: Thalia, Sateen, and Mao Besson.

Besson was awarded the Inkpot Award in 2016.

In 2000, Besson superseded his production company by co-founding EuropaCorp with Pierre-Ange Le Pogam, with whom he had frequently worked since 1985. Le Pogam had then been Distribution Director with Gaumont. EuropaCorp has had strong growth based on several English-language films, with international distribution. It has production facilities in Paris, Normandy, and Hollywood, and is establishing distribution partnerships in Japan and China.

All content from Kiddle encyclopedia articles (including the article images and facts) can be freely used under Attribution-ShareAlike license, unless stated otherwise. Cite this article:
Luc Besson Facts for Kids. Kiddle Encyclopedia.