The desert locust (Schistocerca gregaria) is a species of locust. Plagues of desert locusts threaten agricultural production in Africa, the Middle East, and Asia. They have done so for centuries. The livelihood of one-tenth of the world’s human population may be affected by this voracious insect. The destructive swarms of locusts do not form every year, but only when conditions are right for them.

The desert locust is potentially the most dangerous of the locust pests because of the ability of swarms to fly rapidly across great distances. It has two to five generations per year. The last major desert locust upsurge in 2004–05 caused crop loss in West Africa and reduced food supply in the area. The desert locust alone is not responsible for famines, but it is a contributing factor. 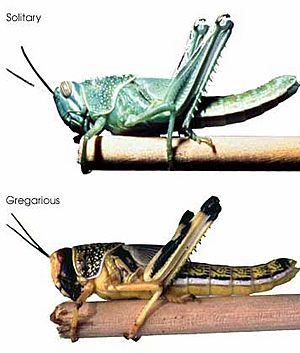 The insect does not have complete metamorphosis. Its larvae develop in stages called "instars". As the larvae get closer to adulthood, they are called "nymphs" or "hoppers". There are two kinds of hopper: solitary and gregarious.

In the solitary phase the hoppers do not group together but move about independently. Their colouring in the later instars tends to be greenish or brownish to match the colour of the herbage.

In the gregarious phase the hoppers bunch together and in the later instars develop a bold colouring with black markings on a yellow background. The immatures are pink and the mature adults are bright yellow and fly during the day in dense swarms.

The change from a solitary insect to a voracious locust pack usually follows a period of drought, when rain falls at last, and vegetation flushes in desert locust breeding places. The population builds up rapidly and the competition for food increases.

As hoppers get more crowded, the close physical contact causes the insects' hind legs to bump against one another. This stimulus triggers a cascade of metabolic changes which move the insects from the solitary to the gregarious phase. When the hoppers become gregarious, their colouration changes from largely green to yellow and black, and the adults change from brown to pink (immature) or yellow (mature). Their bodies become shorter, and they give off a pheromone that causes them to be attracted to each other. This causes swarm formation.

All content from Kiddle encyclopedia articles (including the article images and facts) can be freely used under Attribution-ShareAlike license, unless stated otherwise. Cite this article:
Desert locust Facts for Kids. Kiddle Encyclopedia.