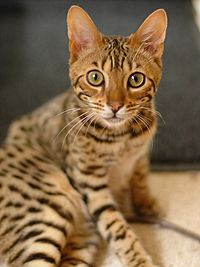 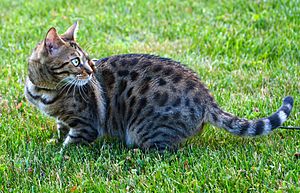 Bengal cats are a hybrid (mixed) breed of house cat. They were bred to be even-tempered. This means they do not get angry easily. Most Bengal cats are spotted and weigh 7 to 20 pounds (3 to 9 kilogrammes).

Bengals as a breed

In the 1970s, Willard Centerwall bred ALCs with domestic cats to aid his studies in genetics because of their apparent immunity to feline leukemia. Eventually, these hybrids were given to Jean Sudgen Mill because of Centerwall's illness.

At the same time, Bill Engler wanted to preserve the exotic cats' genes by breeding them with house cats. Although none of today's Bengal lines originate from these cats, he chose the name "Bengal", which was accepted by the American Cat Fanciers Association (ACFA), the first registry to accept the breed. 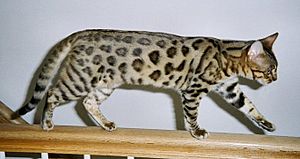 A Bengal cat displaying spotting and rosetting pattern typical of the breed: Rosetted spots occur only on the back and sides, with stripes elsewhere.

Jean Mill was instrumental in recognition of Bengals as a breed by The International Cat Association (TICA) in 1983. Her plan was not to keep the breed as a hybrid, but to domesticate these cats by breeding them further with each other. 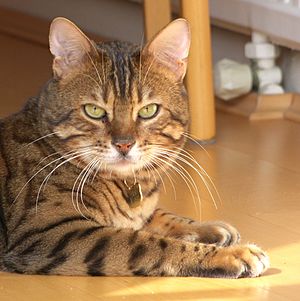 A male Bengal cat: Note the "mascara" (horizontal striping alongside the eyes) and foreleg striping, both typical of the breed.

Greg and Elizabeth Kent were also early breeders, who developed their own line of Bengals using ALCs and Egyptian Maus. This was a very successful line and many modern Bengals will find it in their pedigree. 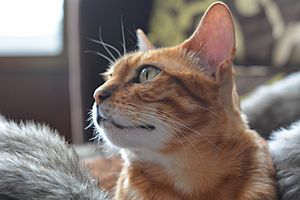 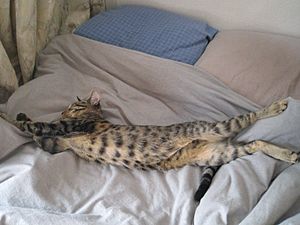 Bengal cats have "wild-looking" markings, such as large spots, rosettes, and a light/white belly, and a body structure reminiscent of the leopard cat. A Bengal's rosetted spots occur only on the back and sides, with stripes elsewhere. The breed typically also features "mascara" (horizontal striping alongside the eyes), and foreleg striping. The eyes of a Bengal cat are relatively large and are usually bright blue or green.

The Bengal cat is usually either classed as brown-spotted or snow-spotted (although there are more colours, brown and snow are the only colours of Bengal that the Governing Council of the Cat Fancy (UK) recognise). Within brown Bengals, there are either marble or spotted markings. Included in the spotted variation is rosetted, which consists of a spot with a dark line surrounding it. Snow Bengals are also either marble or spotted, but are also divided into blue-eyed or any other colour eyes.

The International Cat Association recognizes several Bengal colours (brown, seal lynx point, mink, sepia, silver) and patterns (spotted and marbled) for competition and shows. In the New Traits class, other colours may be shown, as well as longhairs.

After three generations from the original crossing, the breed usually acquires a gentle domestic cat temperament; however, for the typical pet owner, a Bengal cat kept as a pet should be at least four generations (F4) removed from the leopard cat. The so-called foundation cats from the first three filial generations of breeding (F1–F3) are usually reserved for breeding purposes or the specialty pet home environment. Bengals are known for liking water, and require a large amount of attention to keep them happy. Bengals also enjoy playing, and have been recorded jumping over 4 feet from the ground.

A novel autosomal recessive disorder was described in Bengals in 2011, decades after the breed's development. This disease appears to be an early-onset primary photoreceptor disorder, leading to blindness within the first year of age, in cats that possess the anomaly.

Most Bengal cats have type A blood according to a study held in the UK. Using RapidVet-H Feline blood typing cards (dms Laboratories), 98 of 100 Bengal cats tested positive for blood type A. The other two Bengal cats were retested and were found to be type A as well. This led to the conclusion that Bengal cats are predominantly Type A.

As well as being desired for their appearance, they are also known for being a breed that sheds very little. Many claim that the Bengal is a hypoallergenic breed, but this is purely anecdotal evidence, and while some people may not react, others will still have an allergic reaction to them. This is to do with the dander of the cat and not the amount that it sheds.

Bengals are extremely efficient self-groomers, therefore they require little grooming. However, vets do recommend grooming once a week to limit shedding and keep their coat healthy.

Some long-haired Bengals (more properly semi-long-haired) have occurred since the beginning of the Bengal breeding program, as longer-haired domestic cats were among those used in crosses with the wild Asian leopard cat to produce the breed. Some current F4 and later purebred Bengals carry the recessive long-haired genes and when they are mated with each other, they can produce long-haired Bengals. Such offspring were usually spayed or neutered until ongoing intentional development of the long-hair variety, as they did not then qualify as Bengal breeding stock due to their non-conforming long or semi-long coats. On August 21, 2013, long-haired Bengals were granted "preliminary" breed status in the New Zealand Cat Fancy (NZCF) registry under the breed name Cashmere, at the behest of a breeder named Damian Vaughan. They are currently not recognized by any other cat registries. 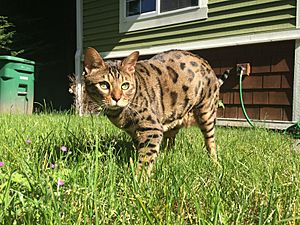 The Cheetoh cat is an ongoing program to crossbreed two existing breeds of spotted domestic cats with defined characteristics (the Bengal and the Ocicat), and develop the result into a third standardized breed that is distinct from both of the foundation breeds. They were initially recognized by only a single minor and permissive breed registry, the United Feline Organization (UFO), starting in November 2004, but have been granted "experimental breed" status (not eligible for show competition) by a major registry, The International Cat Association (TICA), since at least May 2009, under the name Experimental Cheetoh, breed code XCT, a status they still retain as of 2016[update]

All content from Kiddle encyclopedia articles (including the article images and facts) can be freely used under Attribution-ShareAlike license, unless stated otherwise. Cite this article:
Bengal cat Facts for Kids. Kiddle Encyclopedia.