The leopard cat (Prionailurus bengalensis) is a small wild cat of South and East Asia. Since 2002 it has been listed as least concern by IUCN. It is widely distributed, but habitat loss and hunting occurs in places. There are twelve leopard cat subspecies, which differ widely in appearance.

The small cat is not closely related to the leopard. Its leopard-like spots gave it the name.

Leopard cats are the most widely distributed Asian small cats. Their range extends from the Russian Far East, Korea, China, Indochina, the Indian subcontinent, northern Pakistan, the Philippines and the Sunda islands of Indonesia.

They prefer forested habitats, but are found in agriculturally used areas. They live in tropical evergreen rainforests and plantations at sea level, and in subtropical deciduous and conifer forests in the foothills of the Himalayas above 1,000 m (3,300 ft).

The highest altitudinal record was at 4,500 m (14,800 ft) in the Kanchenjunga Conservation Area.

In the northeast of their range they live close to rivers, valleys and in ravine forests, but avoid areas with more than 10 cm (3.9 in) of snowfall. They are rare in Pakistan’s dry treeless areas. In Afghanistan, they were reported in the 1970s from Jalalkot and Norgul in the Kunar Valley, and the Waygul forest of Dare Pech. 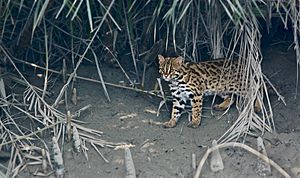 A leopard cat photographed in the Sundarbans, India 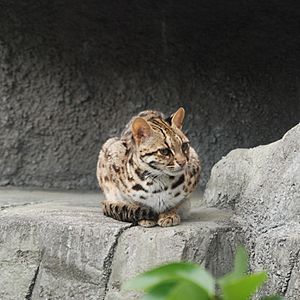 Leopard cats are solitary, except during breeding season. Some are active during the day, but most hunt at night, preferring to stalk murids, tree shrews and hares. They are agile climbers and quite arboreal in their habits. They rest in trees, but also hide in dense thorny undergrowth on the ground. In the oil palm plantations of Sabah, they have been observed up to 4 m (13 ft) above ground hunting rodents and beetles. In this habitat, males had larger home ranges than females, averaging 3.5 km2 (1.4 sq mi) and 2.1 km2 (0.81 sq mi) respectively. Each male's range overlapped one or more female ranges. There is evidence to suggest that rats are abundant and may be easy to catch in oil palm plantations. There, leopard cats feed on a large proportion of rats compared to forested areas.

Leopard cats can swim, but seldom do so. They produce a similar range of vocalisations to the domestic cat. Both sexes scent mark their territory by spraying urine, leaving faeces in exposed locations, head rubbing, and scratching.

Leopard cats are carnivorous, feeding on a variety of small prey including mammals, lizards, amphibians, birds and insects. In most parts of their range, small rodents such as rats and mice form the major part of their diet, which is often supplemented with grass, eggs, poultry, and aquatic prey. They are active hunters, dispatching their prey with a rapid pounce and bite. Unlike many other small cats, they do not "play" with their food, maintaining a tight grip with their claws until the animal is dead. This may be related to the relatively high proportion of birds in their diet, which are more likely to escape when released than are rodents.

The breeding season of leopard cats varies depending on climate. In tropical habitats, kittens are born throughout the year. In colder habitats farther north, females give birth in spring. Their gestation period lasts 60–70 days. Litter size varies between two and three kittens. Captive born kittens weighed 75 to 130 grams (2.6 to 4.6 oz) at birth and opened their eyes by latest 15 days of age. Within two weeks, they doubled their weight and were four times their birth weight at the age of five weeks. At the age of four weeks, their permanent canines break through, and they begin to eat meat. Captive females reach sexual maturity earliest at the age of one year and have their first litter at the age of 13 to 14 months. Captive leopard cats have lived for up to thirteen years.

All content from Kiddle encyclopedia articles (including the article images and facts) can be freely used under Attribution-ShareAlike license, unless stated otherwise. Cite this article:
Leopard cat Facts for Kids. Kiddle Encyclopedia.