The fancy rat or pet rat is a type of the brown rat (Rattus norvegicus) that is bred to be a pet. The name fancy rat has nothing to do with the "fanciness" of how they look. It comes from the phrase animal fancy. A person who keeps pet rats is said to be involved in "rat fancy." Some people domesticate black rats (Rattus rattus), and Gambian pouched rats (Cricetomys gambianus). These types of rats are not usually called fancy rats because the hobby does not center around them.

Fancy rats have been bred as pets at least since the late 19th century. They can have many different colors and coat types. They are sociable, intelligent animals. They can learn to come when called, use a litter box, and do many different tricks. Pet rats act differently from rats found in nature. The number of generations since they have been removed from the wild and how they were bred has an effect on how much they act differently. They are not any more of a health risk than other common pets.

In the 19th century france, Fancy Rats were quite a popular attraction of entertainment, they could be taughtt a handfull of tricks.

Fancy rats do not have the diseases and illness as a wild rat would have. Fancy rats can have ears on the top of their head (standard) or at the side (dumbo) 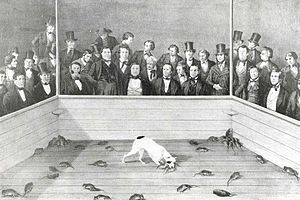 The blood sport of rat-baiting is an unlikely antecedent for the practice of keeping rats as pets. 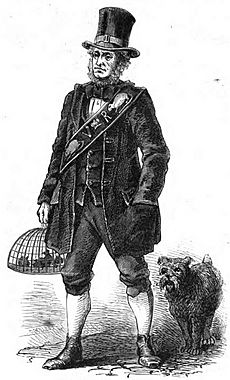 Jack Black made his living not only from catching rats, but also from selling them for use in baiting.

The origin of the modern fancy rat begins with the rat-catchers of the 18th and 19th centuries who trapped rats throughout Europe. These rat-catchers would then either kill the rats, or, more likely, sell the rats to be used in sport. It is believed that both rat-catchers and sportsmen began to keep certain, odd-colored rats during the height of the sport, eventually breeding them and then selling them as pets.

The two men thought to have formed the basis of rat fancy are Jack Black, rat-catcher to Queen Victoria, and Jimmy Shaw, manager of one of the largest sporting public houses in London. These two men are responsible for beginning many of the color varieties present today. Black, specifically, was known for taming the "prettier" rats of unusual color, decorating them with ribbons, and selling them as pets.

Rat fancy as a formal, organized hobby began when a woman named Mary Douglas asked for permission to bring her pet rats to an exhibition of the National Mouse Club at the Aylesbury Town Show in England on October 24, 1901. Her black-and-white hooded rat won "Best in Show" and ignited interest in the area. After Douglas' death in 1921, rat fancy soon began to fall back out of fashion.

The original hobby formally lasted from 1912 to 1929 or 1931, as part of the National Mouse and Rat Club, at which point Rat was dropped from the name, returning it to the original National Mouse Club. The hobby was revived in 1976 with the formation of the English National Fancy Rat Society (NFRS). Pet rats are now commonly available in stores and from breeders, and there exist several rat fancier groups worldwide. 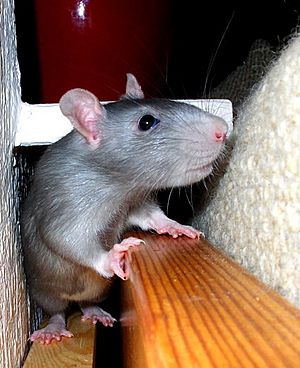 The American Blue is one of several standardized coat colors.

As in other pet species, a variety of colors, coat types, and other features that do not appear in the wild have either been developed, or have appeared spontaneously. Any individual rat may be defined one or more ways by its color, coat, marking, and non-standard body type. This allows for very specific classifications such as a ruby-eyed cinnamon Berkshire rex Dumbo.

While some pet rats retain the agouti coloring of the wild brown rat (three tones on the same hair), others have solid colors (a single color on each hair), a trait derived from rats with black coats. Agouti-based colors include agouti, cinnamon, and fawn. Black-based colors include black, beige, and chocolate.

Eye color is considered a subset of coloring, and coat color definitions often include standards for the eyes, as many genes which control eye color will also affect the coat color or vice versa. The American Fancy Rat and Mouse Association (AFRMA) lists black, pink, ruby, and odd-eyed (two different-colored eyes) as possible eye colors, depending on the variety of rat shown. Ruby refers to eyes which at a glance appear black but which are on closer observation a deep, dark red.

Color names can vary for more vaguely defined varieties, like lilac and fawn, while the interpretations of standards can fluctuate between (and even within) different countries or clubs. 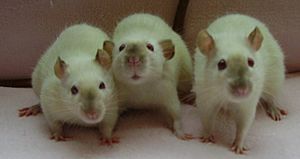 Himalayan rats have a unique color and marking variation.

Further dividing the varieties of fancy rats are the many different markings. Pet rats can appear in any combination of colors and markings. The markings are typically in reference to the patterns and ratios of colored hair versus white hair. Two extremes would be a self (completely solid, non-white color) and a Himalayan (completely white except blending into colored areas at the nose and feet, called points, as in a Himalayan cat's markings).

Markings have a strict standard, with detailed terminology, for showing in fancy rat pet shows. However, many domestic rats are not closely bred to any color standard; many of those found in pet shops will have mismarkings from a formal breeding perspective, which are defined as variations in markings that are not recognized as conforming to a breed standard published by a rat fancier organisation.

Other marking varieties include spotted or Dalmatian (named for the spotted Dalmatian dog), essex, masked, and Siamese (typically a gradient of color along the body, darkest at the base of the tail and nose as in Siamese cats), and downunder or downunders (an Australian variety which has a solid color stripe on the belly or a color marking there that corresponds to markings on top). 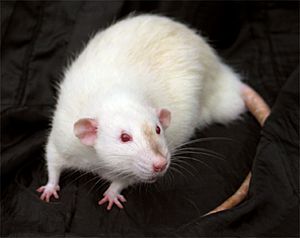 A male Dumbo rat, a variety with ears placed lower on the head.

Two of the most prominent and standardized physical changes applied to rats through selective breeding are the development of the Manx and Dumbo. The Dumbo, whose origins are in the United States, is characterized by having large, low, round ears on the sides of its head, and was named for resemblance to the fictional Dumbo the Elephant. The Manx rat is tailless due to a genetic mutation, and was named for the Manx cat, which shares this feature, though not necessarily due to the same mutation.

There is a relatively small variety of coats in relation to the number of colors and markings, and not all are internationally standardized. The most common type is the normal or standard, which is allowed variance in coarseness between the sexes; males have a coarse, thick, rough coat, while females' coats are softer and finer. Other standardized coats include: rex, in which all the hairs are curly, even the whiskers; velveteen, a softer variation of the rex; satin or silky coat, which is extra-soft and fine, with a sheen; and Harley, characterized by wispy long straight hairs. Remaining coat types are not defined by the hair itself, but rather by the lack of it, such as hairless rats. 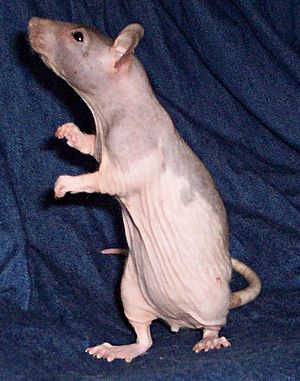 Even though this rat is hairless, pigmentation indicates that it is a hooded rat.

Hairless rats are a coat variety characterized by varying levels of hair loss. Hairless rats, bred from curly-coated rexes, range from having areas of very short fur to being completely bare. Hairless rats are genetically produced by breeding different combinations of the genes that cause Rex coats. Since rex is a dominant trait, there only needs to be one rex parent to produce curly rex-coated offspring. However, when two copies of the trait are present, by breeding two rexes together, the coat is affected differently—causing hairlessness, and earning the colloquial name, "double-rex". One subset of semi-hairless rats, Patchwork rats, constantly lose hair and regrow it in different "patches" several times throughout their life.

All content from Kiddle encyclopedia articles (including the article images and facts) can be freely used under Attribution-ShareAlike license, unless stated otherwise. Cite this article:
Fancy rat Facts for Kids. Kiddle Encyclopedia.