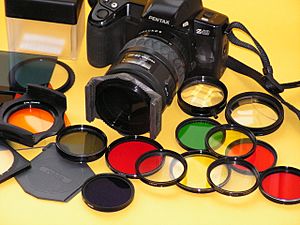 Colour vision is the ability of an organism or machine to distinguish objects based on the wavelengths (or frequencies) of the light they reflect, emit, or transmit.

Colours can be measured and quantified in various ways; indeed, a person's perception of colors is a subjective process whereby the brain responds to the stimuli that are produced when incoming light reacts with the several types of cone cells in the eye. In essence, different people see the same illuminated object or light source in different ways.

For humans, the visible spectrum ranges approximately from 380 to 740 nm, and there are normally three types of cones. The visible range and number of cone types differ between species.

With colour vision gets better vision (more information) about the things it sees. This lets it see when fruit or vegetables are ripe, and lets it see animals hiding from plain sight. The advantage of colour vision is mainly in the daytime. At night the main problem is to collect light and see in the weak light. This is something rods do better than cones. 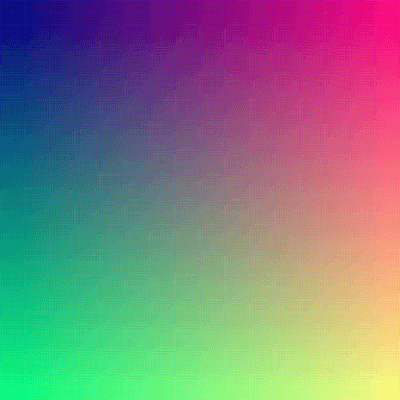 Colour vision is not an all-or-none state. Many groups of animals can distinguish colour, but in different ways. In mammals, for instance, some groups are without colour vision, and some are dichromats: they have two kinds of cones, and cannot see ultraviolet, red and orange light. It is thought that the mammals which survived though the Jurassic period were small nocturnal burrowing animals with little need to see colour.

Later, after the extinction of the dinosaurs, many lines adapted to be more active in the daytime. Most developed a form of colour vision, which is much more useful in the daytime. Primates developed full (trichromacy) colour vision. For them, the ability to distinguish the colour of fruit and leaves is almost essential.

Many insects have colour vision in the ultraviolet range, which humans do not. That is why honey guides on flowers are so noticeable in ultraviolet light photographs.

Color perception mechanisms are highly dependent on evolutionary factors, of which the most prominent is thought to be satisfactory recognition of food sources. In herbivorous primates, color perception is essential for finding proper (immature) leaves. In hummingbirds, particular flower types are often recognized by color as well.

On the other hand, nocturnal mammals have less-developed color vision, since adequate light is needed for cones to function properly. There is evidence that ultraviolet light plays a part in color perception in many branches of the animal kingdom, especially insects.

All content from Kiddle encyclopedia articles (including the article images and facts) can be freely used under Attribution-ShareAlike license, unless stated otherwise. Cite this article:
Colour vision Facts for Kids. Kiddle Encyclopedia.