James Andrew McAvoy Jr. born 21 April 1979 is a Scottish actor. He made his acting debut as a teen in 1995 and continued to make mostly television appearances until 2003, when his feature film career began. He continued to work in both areas from then on. His notable television work includes the drama show State of Play and the science fiction show Frank Herbert's Children of Dune.

Besides screen acting, McAvoy has performed in several West End productions and received three nominations for the Laurence Olivier Award for Best Actor. He has also done voice work for animated films including Gnomeo & Juliet, its sequel, Sherlock Gnomes, and Arthur Christmas. During his career he has been nominated for and also received numerous awards.

McAvoy was born in Glasgow, Scotland and was brought up as a Roman Catholic. He attended St Thomas Aquinas Secondary in Jordanhill, Glasgow, a Catholic school, and briefly considered joining the Catholic priesthood. In a 2006 interview, McAvoy said that he considered becoming a priest as a child because it seemed to be a way to explore the world via missionary work. During his education, he worked at a local bakery. 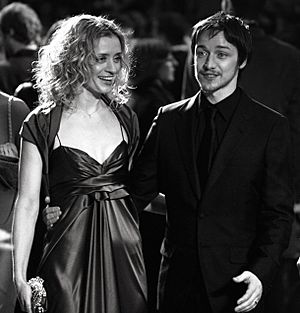 McAvoy with then wife Anne-Marie whom he married in November 2006. The couple announced their intention to divorce in May 2016

While working, McAvoy started a relationship with Anne-Marie Duff and they married on 11 November 2006 in a quiet ceremony. They have one child together (b. 2010). On 13 May 2016, McAvoy and Duff jointly announced their decision to divorce.

McAvoy's big interest outside acting and science fiction is football; he is a huge fan of Celtic Football Club, stating that his dream role would be to play Celtic legend Jimmy Johnstone. McAvoy considers himself a spiritual person.

McAvoy is a celebrity supporter of the British Red Cross with whom he travelled to Uganda to raise awareness of the projects there. In February 2007, he visited northern Uganda and spent four days seeing projects supported by the British Red Cross. In 2015, McAvoy pledged £125,000 to a 10-year scholarship programme at his former drama school, the Royal Conservatoire of Scotland.

All content from Kiddle encyclopedia articles (including the article images and facts) can be freely used under Attribution-ShareAlike license, unless stated otherwise. Cite this article:
James McAvoy Facts for Kids. Kiddle Encyclopedia.