Lord Asriel is a character in Philip Pullman's His Dark Materials trilogy. Asriel is a member of the aristocracy in a parallel universe dominated by the Church. He is described as being "a tall man with powerful shoulders, a fierce dark face, and eyes that seem to flash and glitter with savage laughter". Possessed of enormous determination and willpower, he is fierce in nature and commands great respect in both the political and academic spheres, being a military leader and a fellow of Jordan College in his world's version of Exeter College, Oxford.

Asriel is one variant spelling of the Hebraic name Azrael, who, in the Jewish and Muslim tradition is mentioned in the counting of the tribes. "Azrael" is also traditionally believed to be the Angel of Death in some sects of Islam, as well as some Hebrew lore. His dæmon is called Stelmaria, a snow leopard.

Marisa Coulter was Edward Coulter's wife. Lyra, the product of Marisa's affair with Lord Asriel, was born when Marisa was just 21. Lyra resembled Asriel rather than Edward Coulter, so Mrs Coulter gave her to Asriel, who placed their daughter with a gyptian woman, later revealed to be Ma Costa. When Edward Coulter found out about the affair, he went to kill the baby Lyra, but Asriel fought and killed Edward. Asriel had his wealth and status taken away, and Lyra was placed in a convent. Asriel, outraged, took Lyra from the convent, and placed her at Jordan College, and ordered the Master to never allow Mrs Coulter to contact Lyra. However, Marisa eventually turns up, intending to take Lyra north. Lyra agrees, but escapes when she discovers Mrs Coulter's intentions for the stolen children, as the head of the Oblation Board. When Lyra is kidnapped and taken to Bolvangar, Marisa races in to rescue her just as Lyra and Pantalaimon are about to be severed. In the film adaptation, she comforts Lyra and tells her she is her mother. Horrified, Lyra escapes once again, and this time she seeks out Lord Asriel to deliver the alethiometer. Unknowingly, Lyra leads her friend, Roger, to his death at the hands of Asriel, as Asriel requires the energy release of severing a child from their daemon in order to open the rift between the worlds. At this time Mrs Coulter and Lord Asriel briefly meet, but Asriel leaves her to continue his campaign while Mrs Coulter hesitates.

Lord Asriel and Mrs Coulter meet once again in Amber Spyglass, when Mrs Coulter is captured by Asriel's men. He rescues her once as well and takes her back to his adamant tower. She and Asriel join forces to defeat Metatron, the powerful regent of the Authority, simply to give Lyra, their child, a chance to live. They die together in a chasm between worlds to destroy Metatron.

Lord Asriel is perhaps one of the best examples of a man who believes that the ends justify the means. Though he willingly sacrifices people, even children, to achieve his goal, he does not hesitate to give his own life in the course of achieving it. He acts not for selfish gain but to achieve a world which, in his eyes, is the best possible world for humanity.

He appears at first as a cold-hearted and seemingly unapproachable person, domineering to his servants and stern to his peers and niece. He shows little emotion, though several times throughout the story he displays sadness and regret for what is necessary, and in the end he shows his love for his child and his former lover, Marisa Coulter, appearing particularly angry when he thinks that fate has brought him Lyra to use as his "sacrifice" to bridge worlds. John Faa also refers to help that Asriel has given to the gyptians in the past, including defending the gyptian way of life in Parliament and diving into fierce waters to rescue drowning men. In La Belle Sauvage Asriel repays Malcolm Polstead for the loan of his canoe by arranging for it to receive a thorough make-over by gyptian boat-makers to make it a sturdier vessel, and later trusts Malcolm to guard Lyra until he can arrange suitable long-term protection for her.

Asriel is an intimidating presence, both physically and intellectually; he appears equally adept at outmanoeuvring his adversaries using his considerable wits and academic knowledge as he is at achieving his objectives through brute strength. He is a tall, broad and powerful man, with Lyra noting that in rooms he has the air of a "wild animal held in a cage too small for it". In the film adaption he has a beard, though no mention is made of it in the books. He is also mentioned to have lively, "black" eyes, glittering with "savage laughter", indicating that beneath his cold and harsh appearance he is really a man with powerful emotions. As one of the characters remarks, he accomplishes things in his relatively short lifetime that some would not be able to do in hundreds of years. 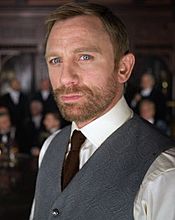 Daniel Craig as Lord Asriel in the film The Golden Compass.

From December 2003 to March 2004, London's Royal National Theatre staged an adaptation of His Dark Materials in which Lord Asriel was played by Timothy Dalton.

James McAvoy plays the role in the BBC television adaptation.

All content from Kiddle encyclopedia articles (including the article images and facts) can be freely used under Attribution-ShareAlike license, unless stated otherwise. Cite this article:
Lord Asriel Facts for Kids. Kiddle Encyclopedia.