Angel of Death facts for kids 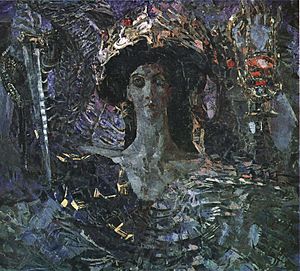 Azrail is a painting by Mikhail Vrubel

Azrael (angel of death) is the archangel of death. It is an English form of the Arabic name Azra'il or Azra'eil (Arabic: عزرایل‎code: ar is deprecated ), the name traditionally attributed to the angel of death in Islam and some Hebrew lore. The Qur'an never uses this name, referring instead to Malaikat al-Maut (which translates directly as angels of death; not one angel). Since it is not mentioned either in the Qur'an nor Hadith, it is not part of the religion. It is thought by some to be legendary or adapted from other religions. It is also spelled Izrail, Izrael, Azrail, Ezraeil, Azraille, or Ozryel. Chambers English dictionary uses the spelling Azrael. The name means Whom God Helps.

All content from Kiddle encyclopedia articles (including the article images and facts) can be freely used under Attribution-ShareAlike license, unless stated otherwise. Cite this article:
Angel of Death Facts for Kids. Kiddle Encyclopedia.